It was perhaps the cheer heard around the UK last weekend, as Ben & Jerry’s FINALLY released their non-dairy flavours this side of the water.

Like most vegans, I am pretty stoked about the whole thing. AT LAST we have a delicious dairy-free ice cream we can grab off the shelf at the supermarket. AT LAST  we can join in with our friends/significant others/families when they’re grabbing a carton of Ben & Jerry’s and a spoon.

It’s not that there aren’t other great vegan ice cream brands already out there – I know some great ones.

But when the King of all ice cream comes along and slams a VEGAN one on the table, you know that things just got serious. A somewhat shift has just happened that could change the mainstream food market forever.

But wait…is all this actually a good idea?

The cheer for vegan Ben & Jerry’s was (rather quickly) muffled when several people cried out against the company.

And there’s good reason, too. Ben & Jerry’s is sadly owned by Unilever – one of the largest animal-testing companies in the world.

And we all know, of course, that this doesn’t technically make it 100% vegan.

Unilever have also been found to conduct cruel and unnecessary tests on mice, rabbits and piglets to prove ‘health benefits’ of some of its food items, such as Lipton iced tea.  The tests were eventually exposed and ended thanks to lobbying and pressure from PETA, but were also being carried out by Nestle, Yakult, Knorr and Hellmanns (just another reason to avoid these companies).

All in all, Unilever is a pretty despicable company, made all the worse by the fact they hold a huge share of the processed foods and household product markets. 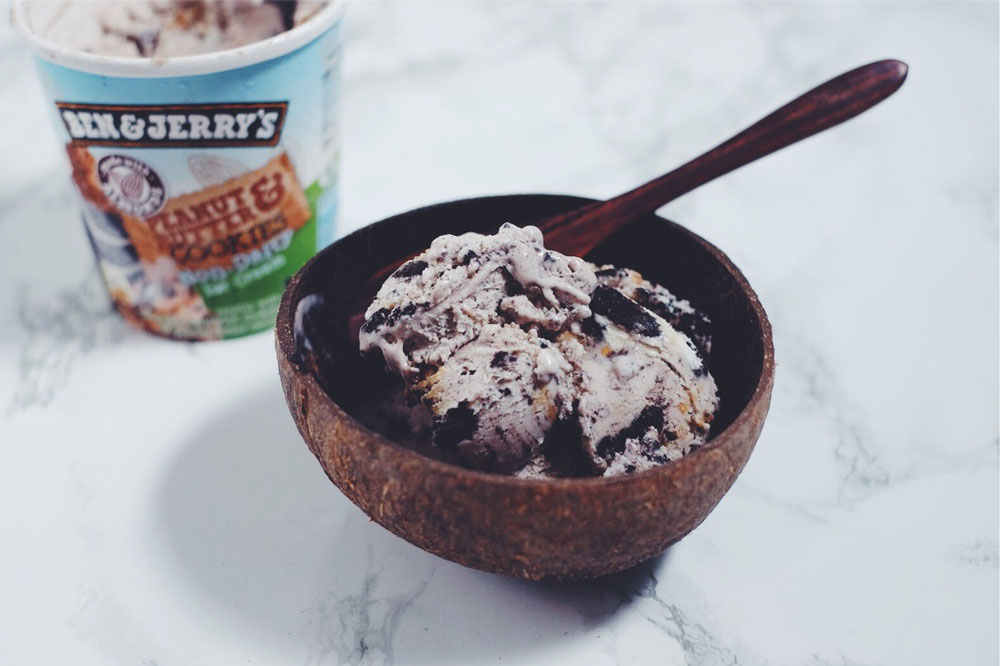 So what are we to do? Should we throw out our Ben & Jerry’s immediately and avoid buying it like the plague?? Hit Unilever where it hurts? Show them we’re not falling for their sneaky tricks?

Well, in my opinion, no.

There are many questions that have been popping up over the internet lately, asking whether it is ‘truly vegan’ to support such an unethical brand.

Of course, I have my own response, and it turns out there are lots of fellow vegans who feel the same way as I do.

Here’s why I don’t think we ought to boycott Ben & Jerry’s.

(And for the record, I don’t support Unilever. I avoid their household products, cosmetics and food items wherever I can help it.) 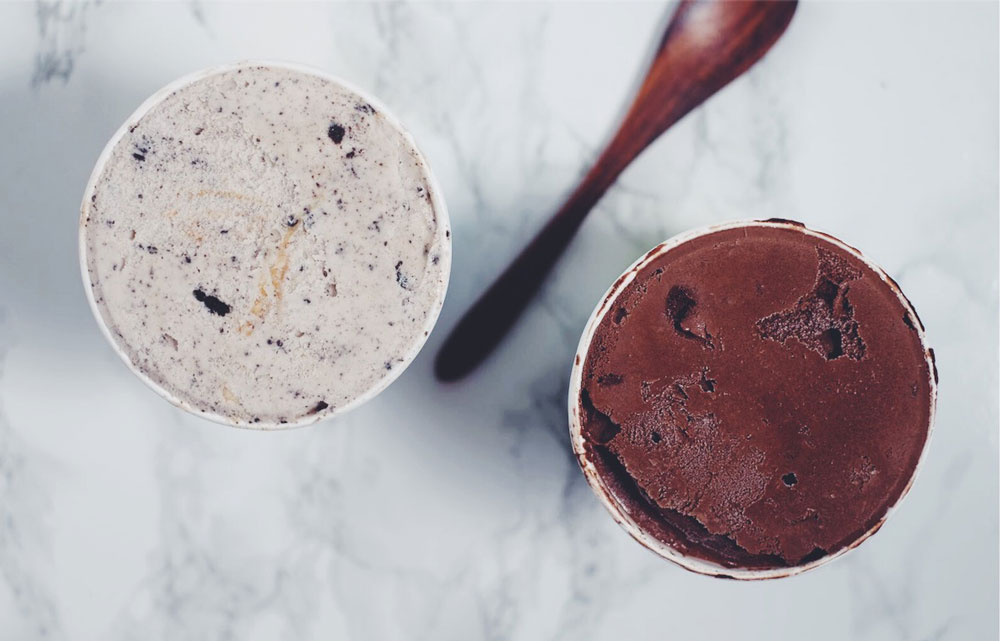 “Ben & Jerry’s is not technically vegan. Should I support it?”

Judging from the ingredients listed on the back of the carton, Ben & Jerry’s non-dairy itself hasn’t been tested on animals. It contains pretty much the usual ingredients you’d expect in any store-bought sweet treat – wheat flour, fructose syrup, vegetable oils etc.

And, being realistic, I doubt those things have ever needed to be tested.

So, what we have in essence is a tasty food product that has not used animals at all. Isn’t this what we, as vegans, want?

If delicious plant-based options are not celebrated and supported, what will happen? The product will not sell and will eventually be removed from the shelves.

The outcome – people continue to believe the false idea that vegan food is neither tasty or desired.

“That ice cream must have been so bad,” they’d say. “Even vegans didn’t want it!”

No, friends. We do want it. We want people to know that vegan food is delicious and easy and requires very little sacrifice.

If that means buying Ben & Jerry’s non-dairy to your heart’s content, so be it. 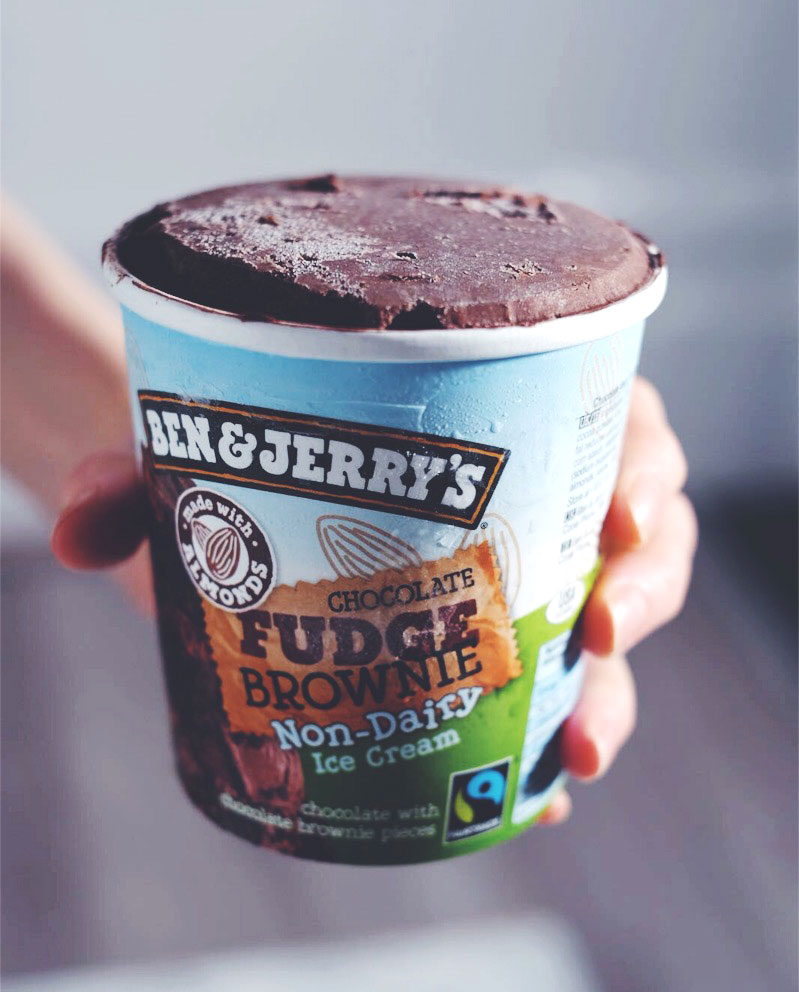 “That money could be invested into making more cruel dairy products.”

It’s true that the money earned from Ben & Jerry’s non-dairy may be invested into making more animal products.

But let’s consider the alternative. What if it was invested into making more non-dairy ice cream instead? What if the non-dairy stuff sold so well, it began selling better than the dairy version? With the rise in popularity of plant-based milks, could that not be a possibility?

And if it is, it’s likely that Ben & Jerry’s will want to make more of the non-dairy range, maybe even adding more flavours. Of course this is only going to benefit our animal friends in the long run. It may not stop Unilever as a conglomerate making animals products, but it COULD sway the Ben & Jerry’s range, which by itself would be a large enough force that could trigger a ripple effect of positive outcomes. 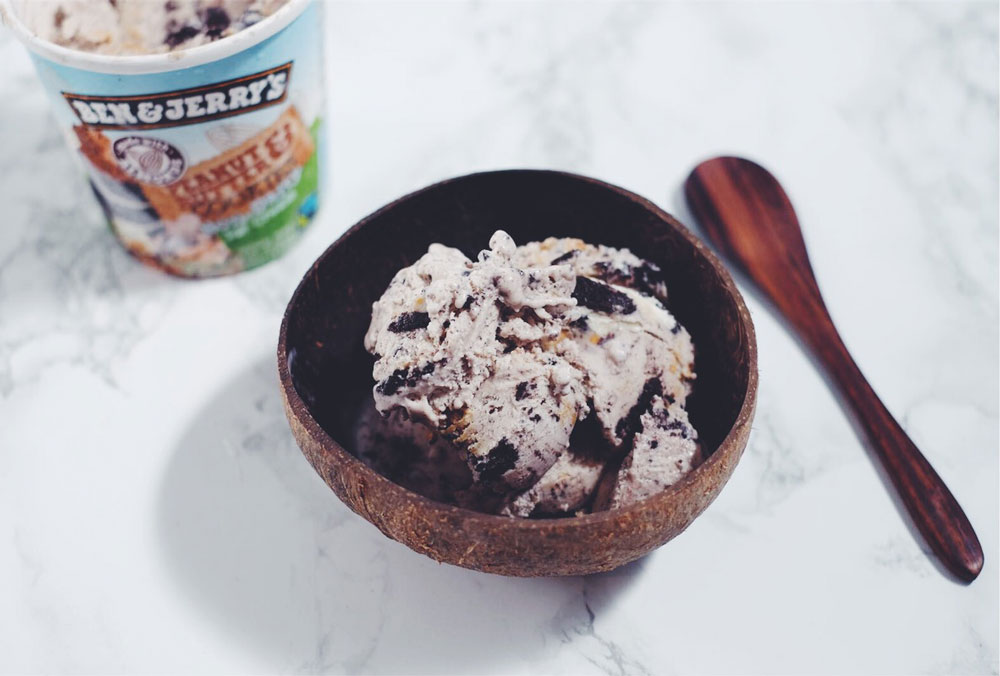 “What about smaller, independent, 100% vegan brands who have fought hard to be sold in large supermarkets? Should we not support these ethically superior brands?”

It’s true that the monopoly of the food market by larger conglomerates is unfair. When one shops at an independent supermarket or world foods store, you realise the vast number of great brands that are doing incredible things yet don’t get the luxury of reaching the mainstream supermarkets.

It’s also true that when one of these companies begins selling at Tesco, or Waitrose, or Sainsbury’s, it’s a huge step for them that took years of hard work. And they’ve still managed to maintain their ethical credentials in the meantime.

So when a huge brand like Ben & Jerry’s wades in and starts selling a vegan product, it’s easy to feel a little resistant. Like, “Should I be doing this? Where do I want to put my money?”

A company that is well-known in the omnivore food market shouldn’t get to ‘barge in’ and take over the vegan market as well. Right??

But let’s look at it another way. Ben & Jerry’s is a hugely popular omnivore brand, that recognised a need for a vegan product. Yes, that’s right – they saw that their customers wanted a non-dairy option and they delivered it.

One of the biggest barriers to veganism (if you ask the average person) involves taste and convenience. In a perfect world, ALL mainstream brands would have a vegan option. You could walk into any restaurant, and any store, and find something vegan to eat (you can pretty much do that now). All of your favourite brands would have a vegan alternative. It would literally feel like no sacrifice to choose the vegan option instead of the animal version.

By one of the biggest ice cream suppliers in the world acknowledging veganism, we are now one step closer to that. A company like Ben & Jerry’s has considerable resources to put into advertising, not to mention brand recognition. This makes non-vegans more likely to try it over a niche vegan brand they have never heard of, which can work to reduce harm in the long term.

However, down to convenience and affordability, mainstream brands may sometimes win out. And so long as it’s reinforcing the bigger message, I’m personally fine with that. 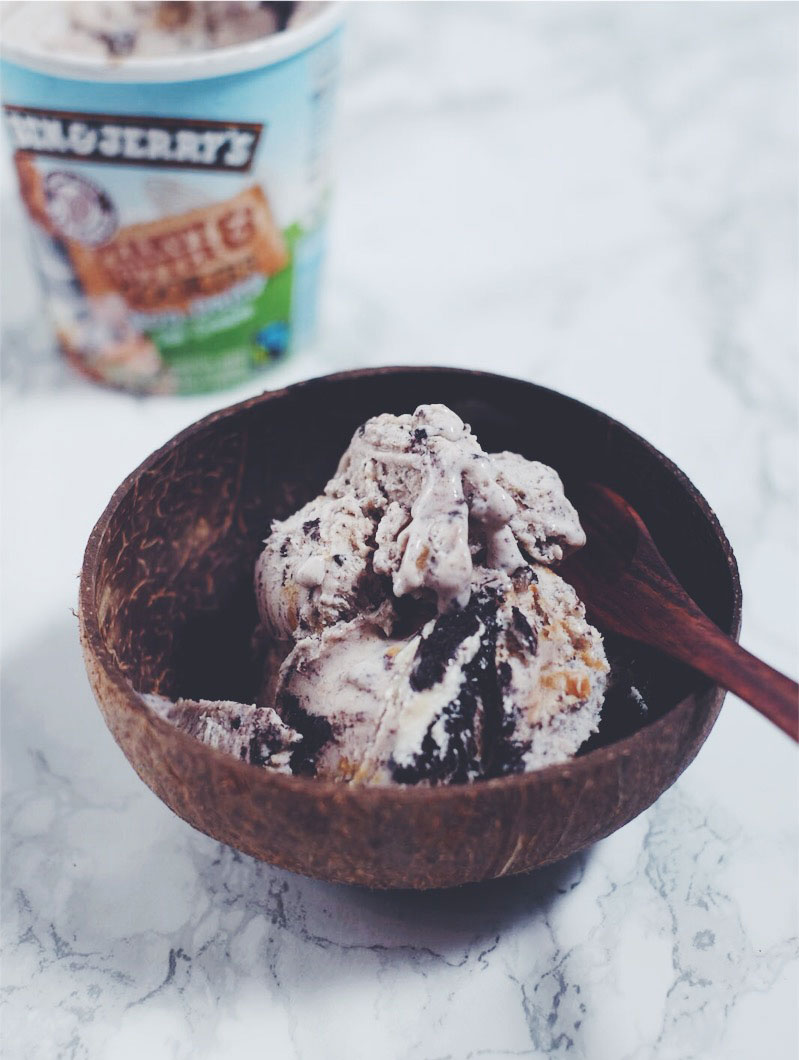 “It’s all about profit for them. They are just ‘cashing in’ on the vegan movement.”

Sure, vegan products made by omnivorous companies are “all about profit”; it’s indeed true.

But that’s the same for all companies. No matter how ethical, sensitive, small or genuine a company is, their ultimate goal is to make money.

Otherwise why would they do what they do?

They do what do to make money. How they do it…that’s a secondary decision.

If more of the food market’s huge corporations recognised a need for vegan products, the proportion of vegan products on supermarket shelves would only increase. The proportion of animal products would reduce. Eventually it’d be a 50/50 split. And after that, who knows. Maybe the scale might tip beyond that. (Hint: it’s going to happen.)

So what happens if we refuse to indulge in these products?

Demand dries up; the product gets pulled, and animal products continue to monopolise our shelves. 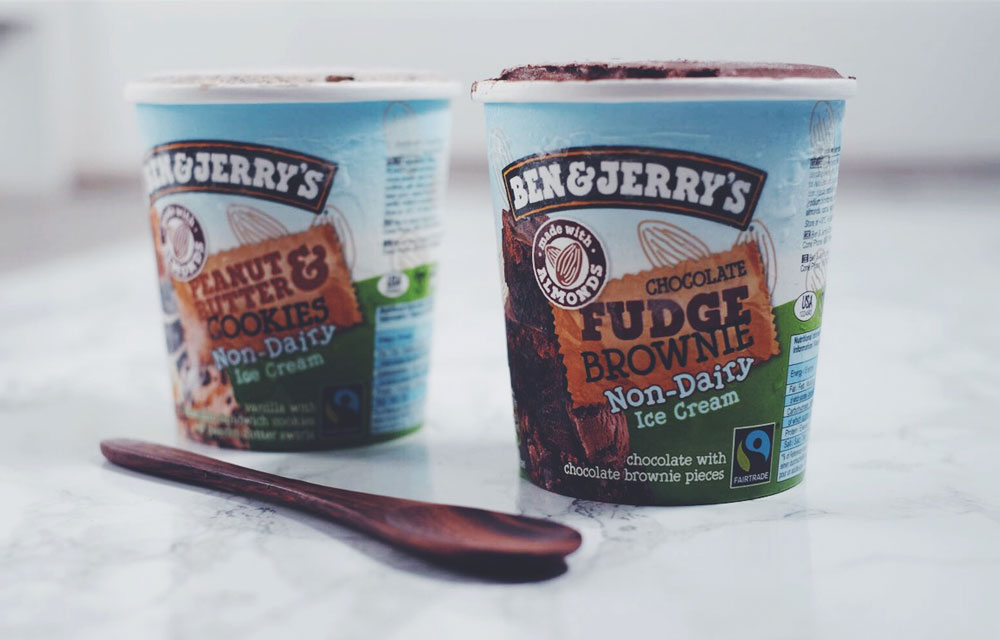 We may not be able to change how Unilever and other conglomerates conduct business. But we can reward their efforts. One step only leads to another; it’s the only way large change happens.

So let’s not let the perfect get in the way of the good. Shop with logic, not with emotion. Support any/all brands that give veganism an outlet. Know that it’s a part of the change we are striving for.

Maybe, with this attitude, we can create greater change within the companies themselves. 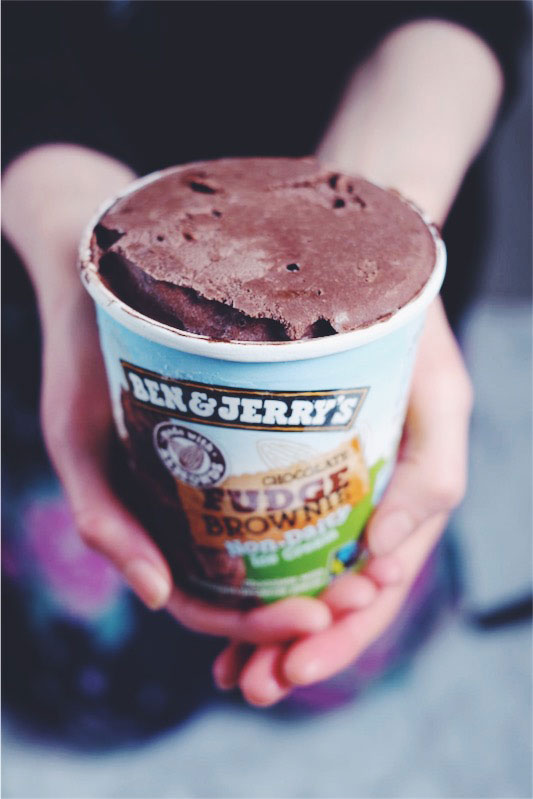