Dates really are a magical food. Whilst they might get a bad rep in a lot of ‘high protein low carb’ circles, they are actually a wonderful addition to your daily diet and bring a whole host of health benefits.

Here are just some of their awesome uses.

Soft, gooey and loaded with high release energy, dates are amazing as a pre/post-workout snack; for munching on at your desk or for eating on the go. Try stuffing them with nut butter and refrigerating for a little while for a tasty afternoon snack! 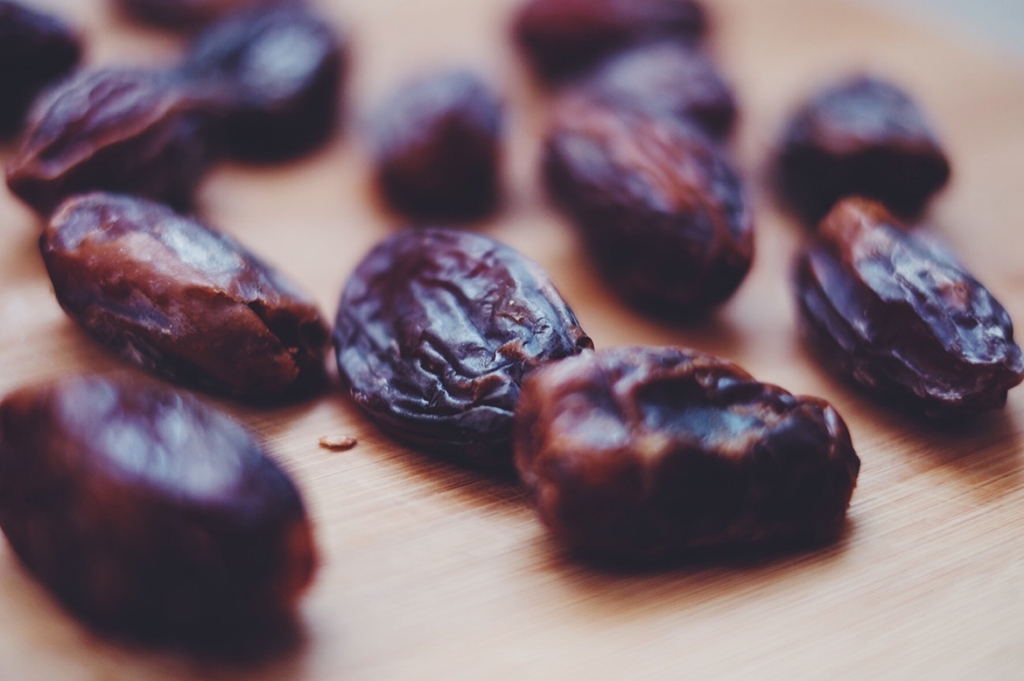 Thanks to their soft, sticky consistency, dates have a great binding quality in baking, often making flour and eggs pretty much redundant.I often use them to make Ella Woodward’s raw brownies, which are really easy to make and free of refined sugar and flour. They’re also great for making protein/energy balls, or blended with nuts to make a sweet crust in pies and cheesecakes.

Dates can also be used as a handy sweetener in a lot of puddings, smoothies and sauces. Blend one or two into your smoothie for a sweet touch, or soak them in hot water and blend to make a pretty FINE caramel sauce.

High in nutrients such as calcium, potassium, iron, phosphorous, manganese, copper and magnesium, dates are great for a quick energy boost and have actually been described as one of the best foods for muscle gain. The potassium is great for the nervous system and helps keep the heart healthy, and their high fibre content can regulate digestion and promote colon and intestinal health.

Magnesium, meanwhile, makes dates a good anti-inflammatory food, even capable of lowering blood pressure. And to top it off, their high iron content makes them a good choice for people suffering with anaemia or who are at risk from iron-deficiency. As I don’t eat meat, all my iron intake comes primarily from green leafy vegetables, pulses, and dates, among other fruits and nuts. 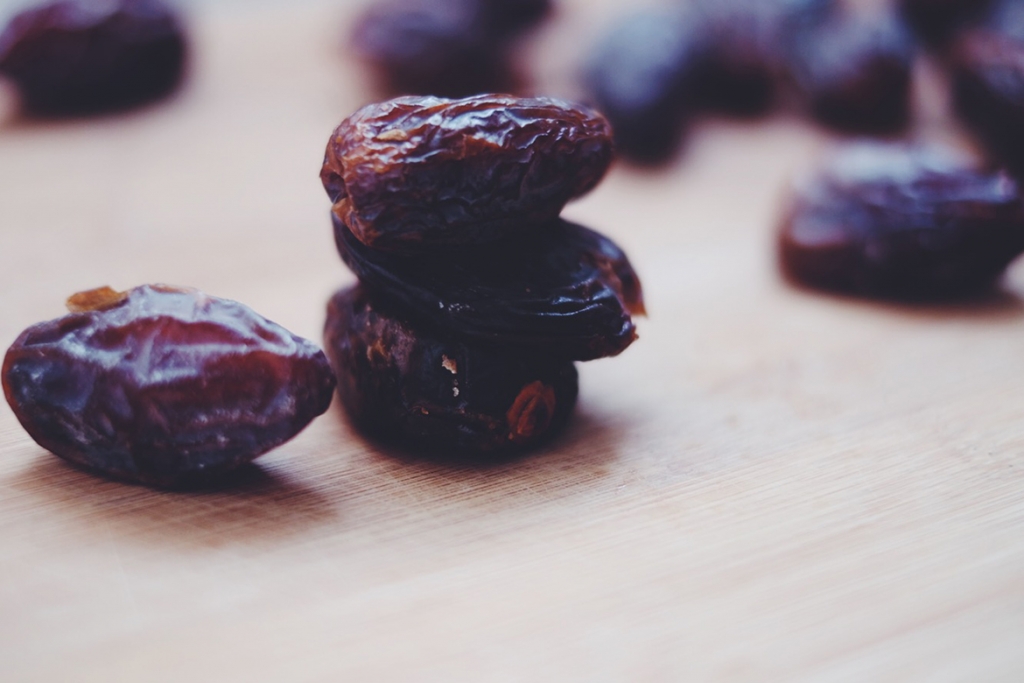 There are tons of different types of dates, all suited to their own uses, but here are the main three you’ll come across.

Medjool dates have only been known since the early 90s as demand for them is relatively new, but their popularity is rapidly increasing. The market for exportation of medjool dates is shared between Israel and the US, and they come in varying sizes, including jumbo, large and medium.

The light, dusty and slightly wrinkled appearance of medjool dates is down to the sugar in the dates that is being released. This is what helps make medjools so awesomely sweet. 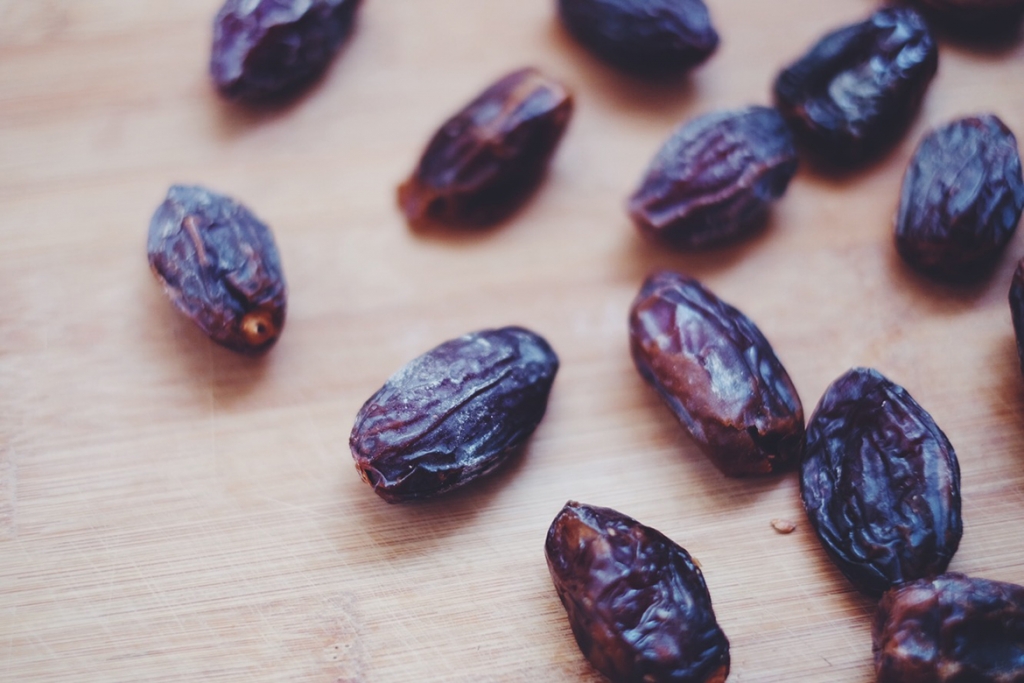 Deglet nour are still a little bit more expensive that regular dates, but a cheaper alternative to medjool. According to fao.org its the most popular variety in the EU, with 90% of the UK’s supply being imported from Tunisia and Algeria, and 10% produced in Israel and the US.

Deglet nours have a similar sticky consistency to medjools so can make a good substitute, but be aware that some aren’t always sold ready-pitted so you may have to do that yourself.

Basic dates are the dried ones you can find in any wholefoods store or supermarket section. The term ‘common date’ is used by European traders to label dates that aren’t deglet nour or medjool, and can include varieties such as kenta, aligh, sayer and zahedi.

As the cheapest date, they are the best cost-effective choice and a good addition to muesli, granola, flapjacks, and porridge, for a hint of sweetness. However, they don’t stick together very easily due to their dried texture, so you’ll want to get medjool if you’re making brownies, cakes or muffins.

It came to my attention a few months ago that a lot of the UK’s dates are in fact being produced by enslaved Palestinian farmers in Israel, whose lands have been stolen from them and are now being forced to work against their will in illegal settlements. Many common sellers of dates including mainstream supermarkets like Tesco, Waitrose and Sainsbury’s, and even indie health food shops, are distributing dates (knowingly or unknowingly) that are a product of this misery, and it’s extremely worrying that such a large variety of fruits we buy on a regular basis is being sourced in this way. 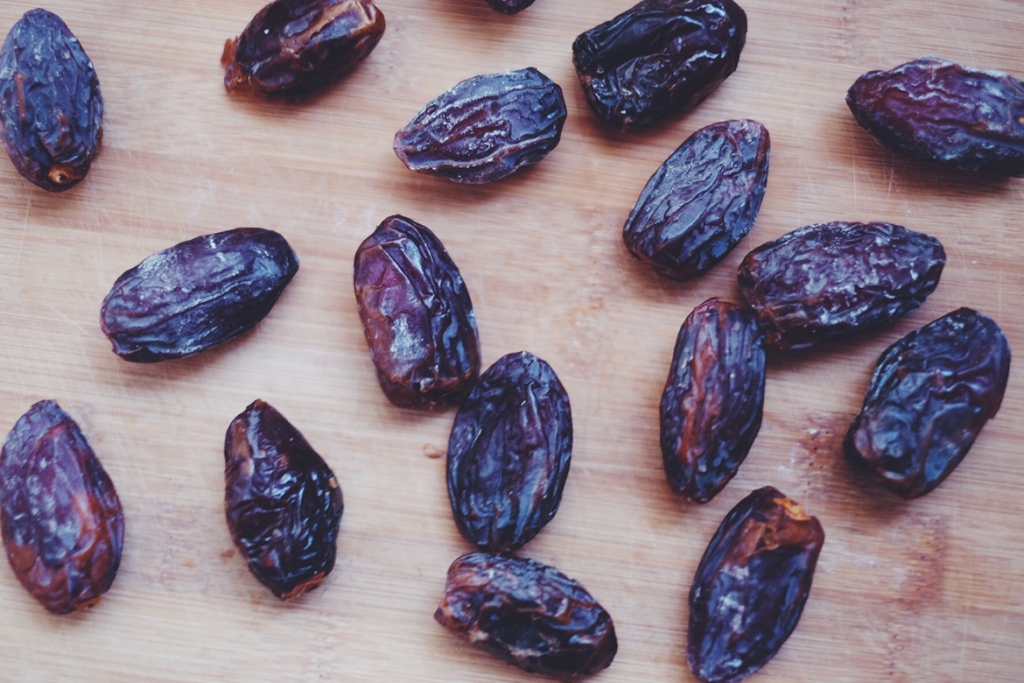 Dates produced on these settlements are often labelled as being from ‘West Bank’, ‘Jordan Valley’ or ‘Produce of more than one country’ (see Tesco dates). Many large-scale suppliers, including the supermarkets, have not wanted to boycott the entire produce of Israel for PC reasons, but have taken to labelling their products as such so the consumer can know what they’re buying. However, this obviously only works if consumers are aware of the issue.

If there’s a health store near you that sells Israeli dates, you can email or write to them to explain the current plight of the Palestinian farmers and ask them to find another supplier (this website will show you how). Alternatively, you can aim to only buy dates not sourced in Israel.

I’m currently on the lookout for an alternative producer from which I can buy my dates, as I admit I haven’t had much luck finding one so far. The only ones I know of right now are Zaytoun and YAFFA. YAFFA supplies only Palestinian dates, so you’d be actively helping farmers if you chose those. If anybody manages to find a high street trader selling non-Israeli dates or even a brand from which I can buy online, please do let me know!