If I had to be totally honest, I’d say I’ve always had somewhat of a weak spot for pot noodles.

Though I never ever eat them now, and only had them occasionally as a kid (a rare treat), there was something I just always loved about their distinct yet familiar taste.

Don’t get me wrong – I know these packaged pots of dried noodles and powder aren’t at all good for you. I know they lack nutrients and vitamins. I know they’re stuffed full of artificial, processed ingredients. And I always knew it, due to only being allowed them occasionally. Maybe it’s the addictiveness of those manufactured ingredients, or the fact that I only had them once in a while…but the taste of a pot noodle was always a delicious thing.

My consumption of pot noodles was probably at its highest when I was a student (naturally). The lack of parent supervision combined with a modest food budget and the student’s desire for easy, fast food meant they probably appeared more times in my diet than they should have. 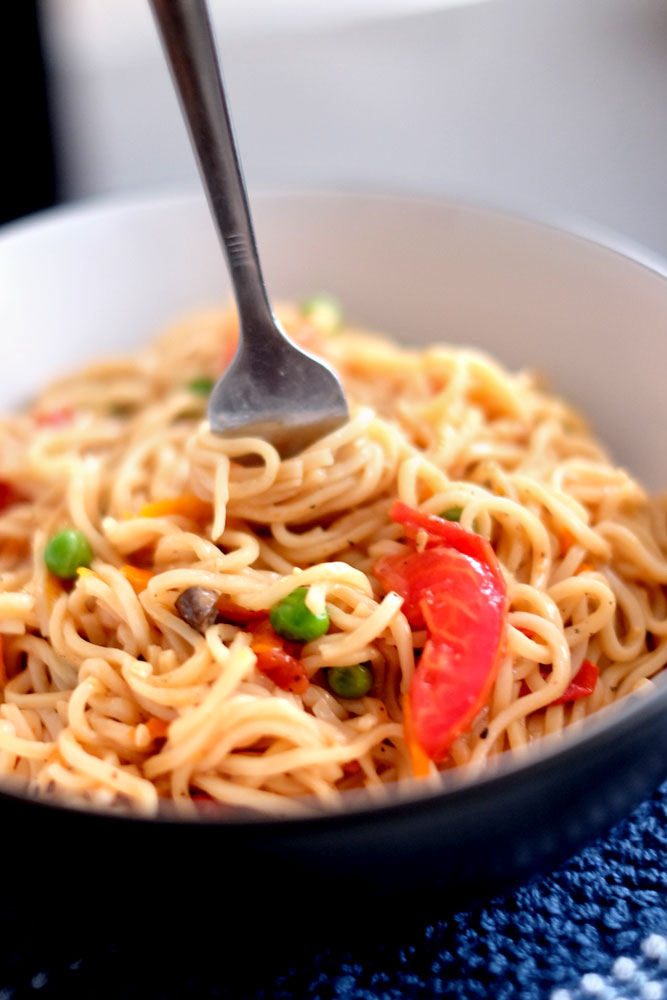 Fast forward a few years and I of course know better now. Once uni was over and I learned more about nutrition and taking better care of myself, pot noodles and other similar processed foods became a thing of the past.

I never really missed them, and let’s face it, since going vegan I always assumed they were off the menu anyway, which definitely made things easier.

But sometime last year – four years into my veganism – I learned something quite surprising.

Some flavours of pot noodle are vegan!

Maybe this is absolutely no surprise to you at all, but if you’re anything like me, you’ll feel like there’s suddenly a bit more light in the world.

Even more so when I tell you that those flavours include beef & tomato (the best flavour, and my all-time fave). 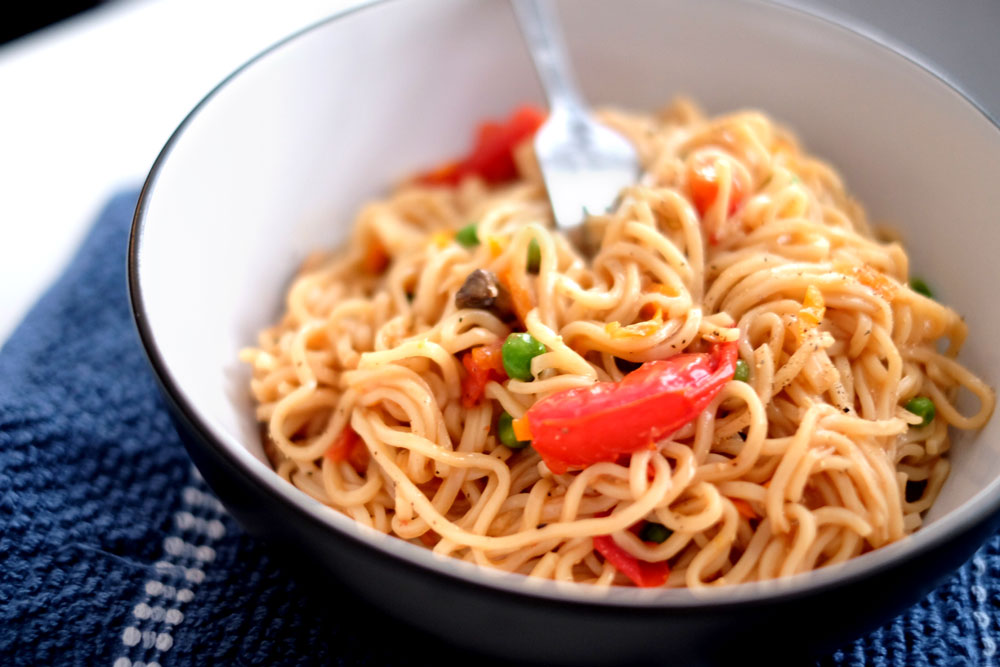 As I said, I hadn’t eaten a pot noodle in years, but after discovering this info I promptly picked one up on the next grocery haul.

Despite the reduced sodium, it tasted pretty much just like I remembered, and I thoroughly enjoyed this one-time nostalgic treat.

However, I knew of course that I couldn’t get attached. These things are full of crap, after all, and if I really like something, I tend to want to eat it pretty often.

So naturally, that meant coming up with a healthier way I could enjoy the taste of this childhood favourite.

So before you say anything, these noodles are of course in a bowl, not a pot. But I hope you’ll let that slide.

I also hope you’ll let slide the fact that it doesn’t contain any actual beef. But seeing as the Pot Noodle Company’s own product is vegan, I’m sure I can be forgiven for making mine the same. (Plus, we all know dead cow flesh is never good for one’s health.) 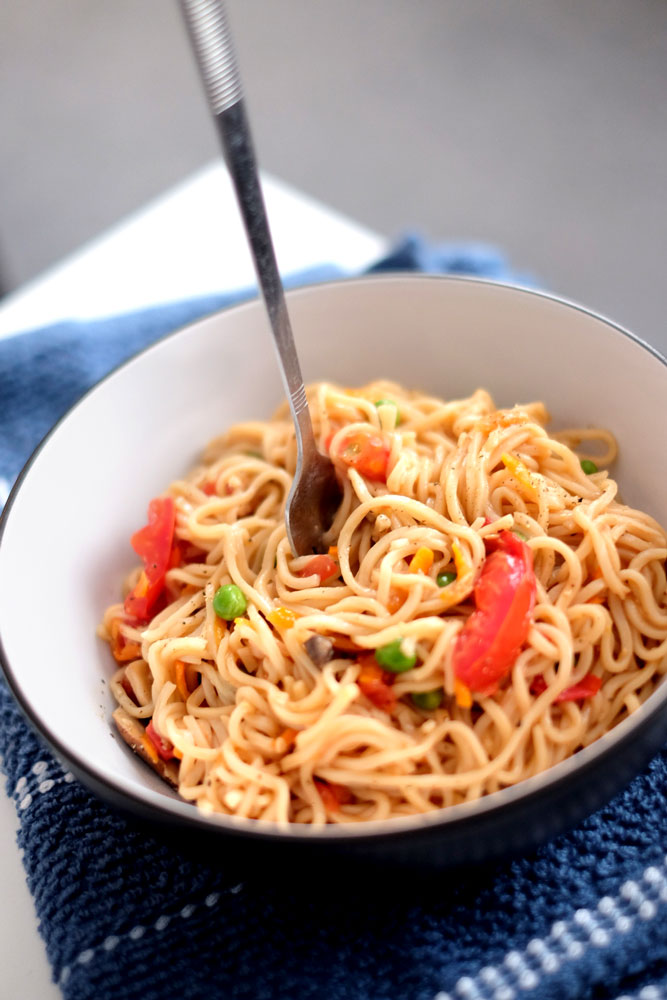 Though a homemade dish will of course rarely taste like its processed equivalent, I have to admit that this recipe comes pretty damn close. Using a curly style of noodle (like spelt or wheat noodles) will give the authentic pot noodle-like texture, whilst peppers, carrots and peas stay true to the beef & tomato variety AND help you get those veggies in.

In my version there’s no powder involved – just good, nourishing veg stock. And as for that ‘beefy’ flavour…well, that’s where yeast extract comes into its own. You can pretty much make anything taste rich and ‘meaty’ with that stuff, and it’s also a great way to get in some iron and B12.

Finally, the ‘tomato’ aspect. Tomato ketchup does feature in this recipe, because – let’s face it – that’s all part of the pot noodle taste. However, it’s definitely sparingly and I always try to use a high quality ketchup (like this organic one by Meridian), or I use Heinz in a pinch. 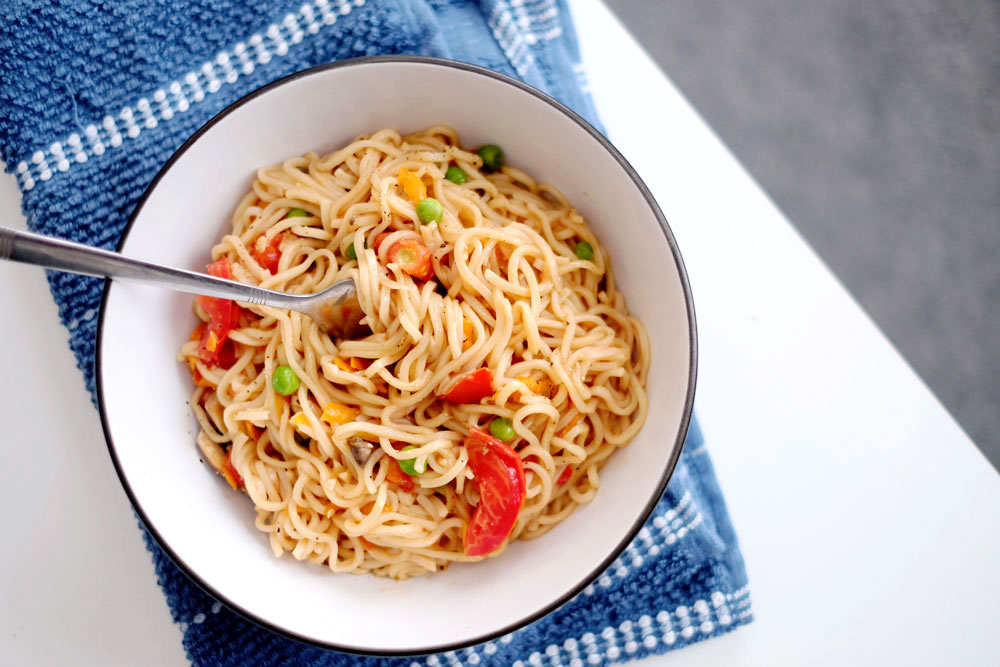 Have you guys tried this recipe? Let me know what you think in the comments below! 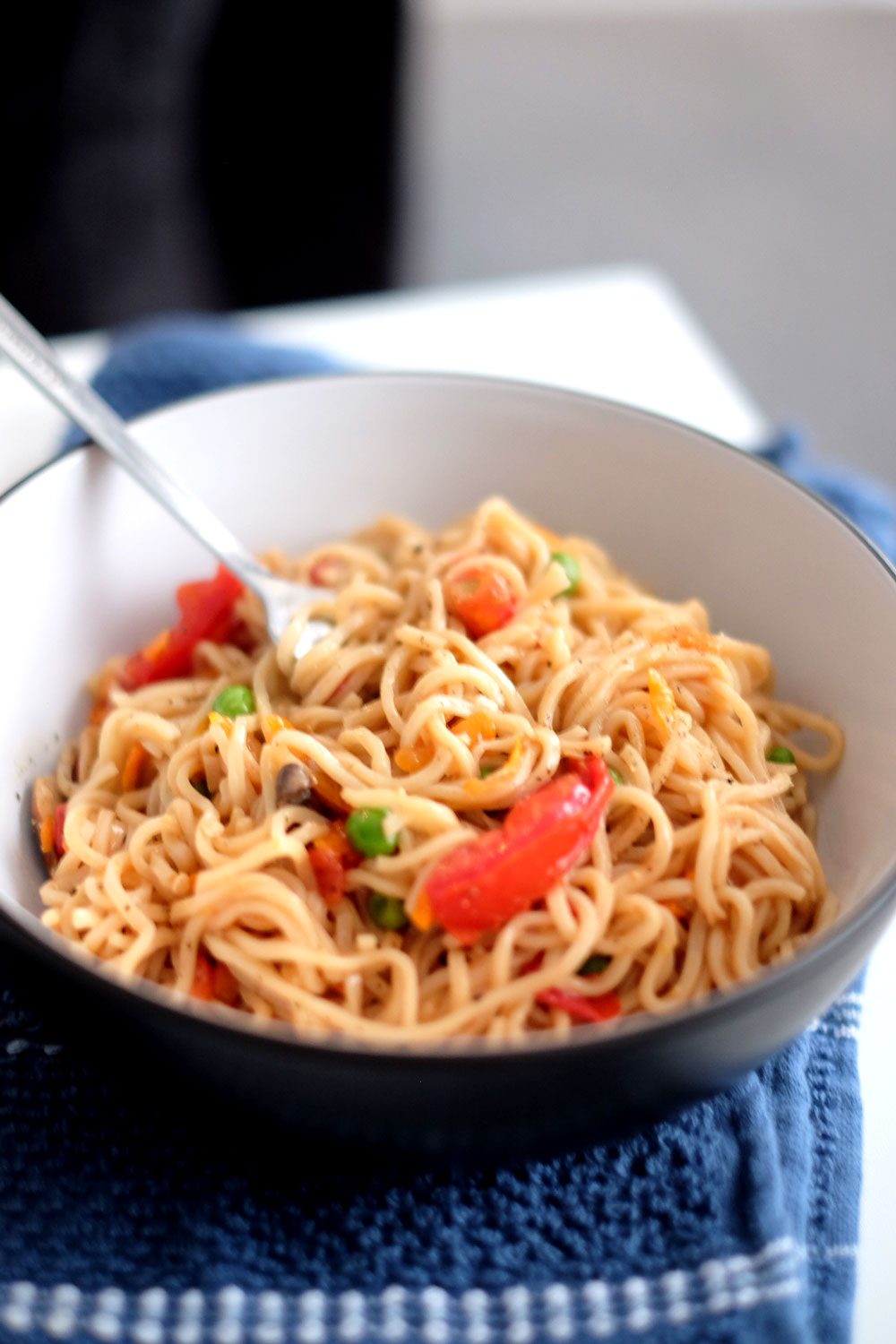 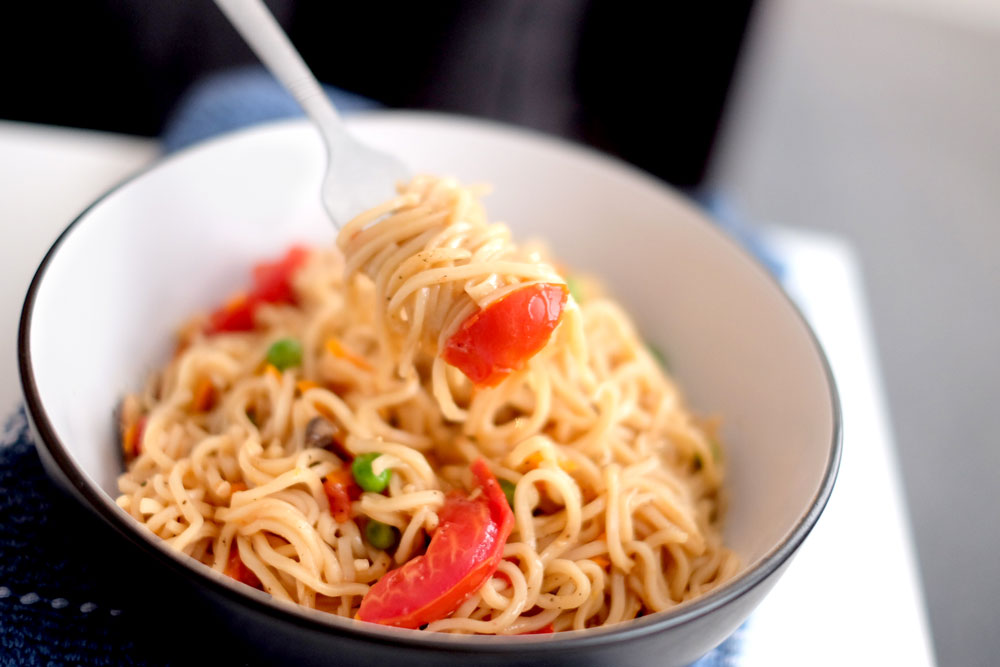