Merry Christmas everyone! I sincerely hope every one of you had an amazing day, filled with friends, family and of course, delicious food!

My day was honestly filled with nothing short of the above; I got to see all of my favourite people; indulged in delectable morsels and received some unbelievably nice presents. I felt absolutely spoilt to death, which is crazy considering I’m probably too old for Christmas presents ;). Nevertheless, I’m gonna take what I can get. This grown-up life is expensive, ya know…

With regards to food, I will say that I had an abundance to munch on throughout the day. This is in part thanks to a bit of planning beforehand and also thanks to my mum, who always caters for me on occasions like this. I often get asked what I eat on Christmas Day because people sometimes can’t believe there’s anything beyond the traditional turkey and pigs-in-blankets :’) But obviously, there is, and I thought it’d be fun to do a blog post encompassing all that I put into my belly. 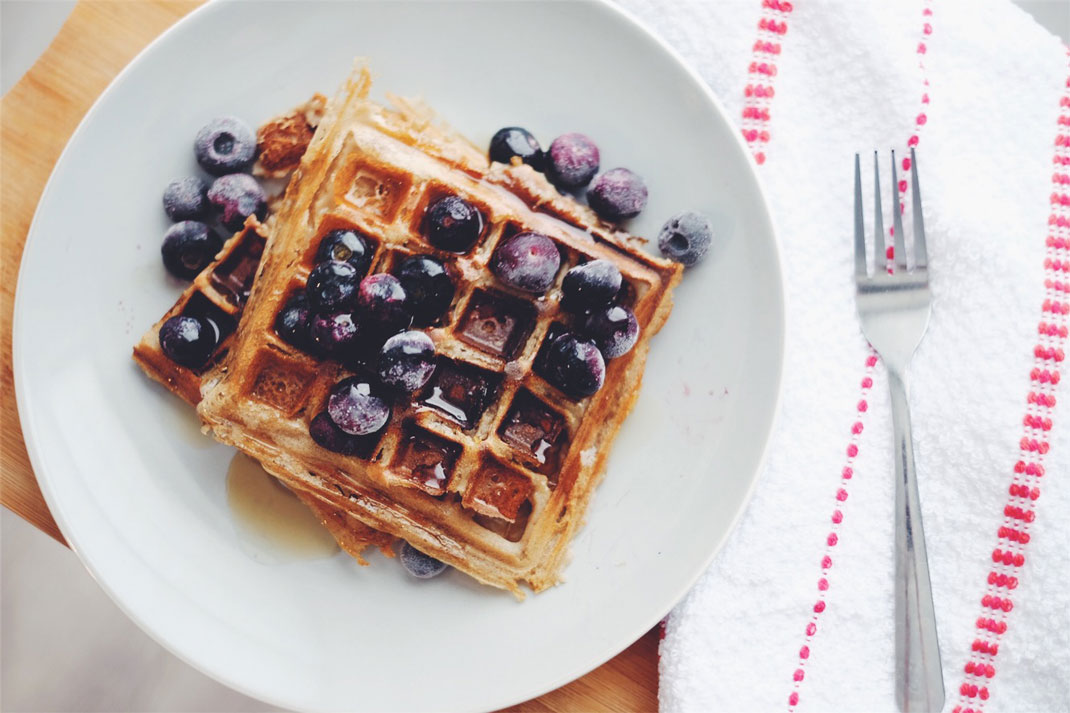 Most people indulge in a fancy breakfast on Christmas day – smoked salmon and champagne seeming to be the most common tradition! This morning my boyfriend and I were trying out our new waffle pan, so our breakfast was waffles using batter we’d made the night before for speediness.

I used Deliciously Ella‘s recipe from her first book, which uses brown rice flour, mashed banana, oat milk and maple syrup. As it was my first time having waffles in YEARS I thoroughly enjoyed them, topped with maple syrup and a few frozen blueberries. 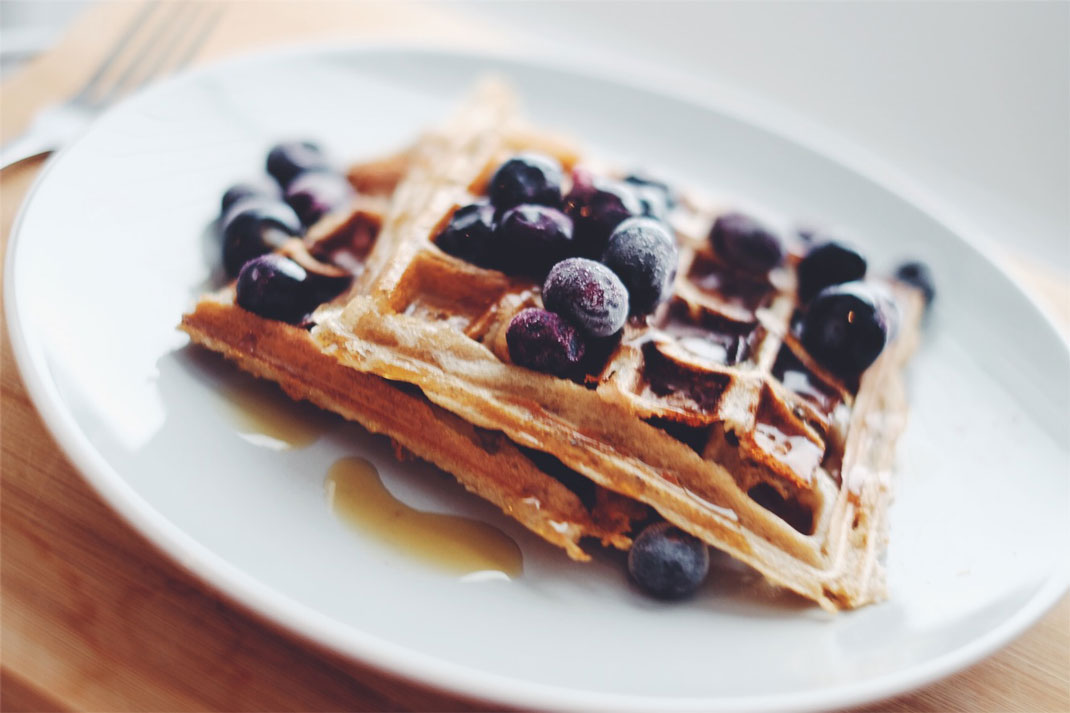 We spent the morning at Christian’s grandparents’ house, where we gave our gifts to his family and had a cup of tea. Despite the waffles, I was starving by 12:30! We arrived at my parents’ house by 1pm and were sitting down to dinner by about 2:30.

For Christmas dinner I’ve always had a nut roast. In the past I’ve made my own, but this year I wasn’t sure if I could be bothered with the effort of preparing one in advance and taking it to my mum’s. So I’d bought one that I knew would be just as good as homemade – an amaranth nut roast from Riverford Organic. It contained butternut squash, sage, amaranth and a good mix of nuts and veggies. It went superbly with my mum’s cranberry sauce and red cabbage and was so so filling! 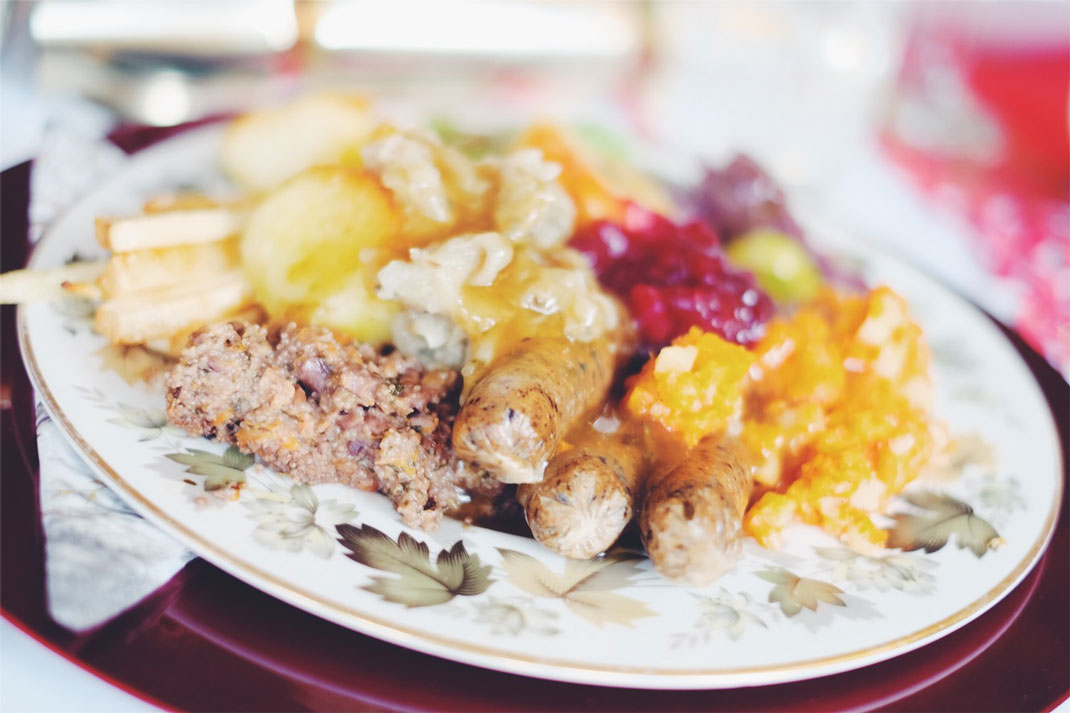 I never want to feel left out when it comes to have sausages on the side of my Christmas dinner, so I always make sure I have some nice vegan sausages to hand. This year I went for Dee’s Traditional  vegan sausages with coriander, dulse and seaweed, which are possibly some of my favourite vegan sausages I’ve tasted! Unlike a lot of other veggie sausages on the market, they contain no weird additives or strange processed ingredients. They’re made from a mix of pea protein, navy beans and black beans and bound together with flax seed. Having seaweed in your sausages might seem a bit strange but I can promise you they’re very tasty and I liked knowing I was adding that bit more nutrition to the best meal of the year ;). 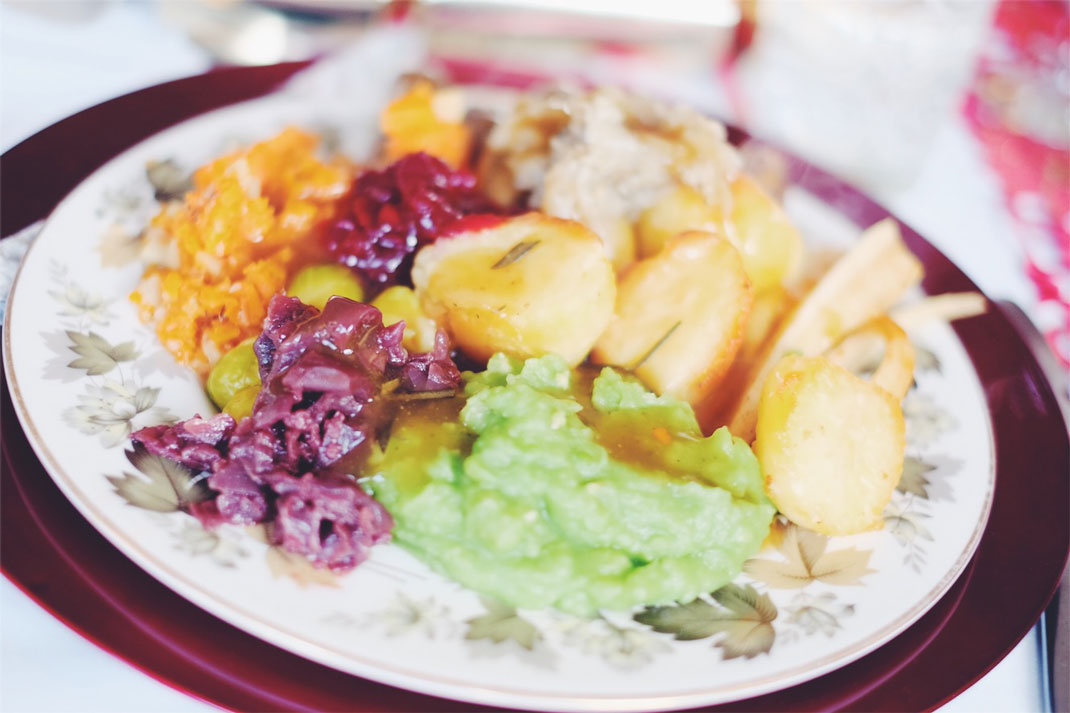 Yes, after all that, I ate dessert! I did have a bit of a break though, as my parents don’t have a dishwasher so we all had to pitch in with the dishes. I’m pretty sure that burned some of the calories off. 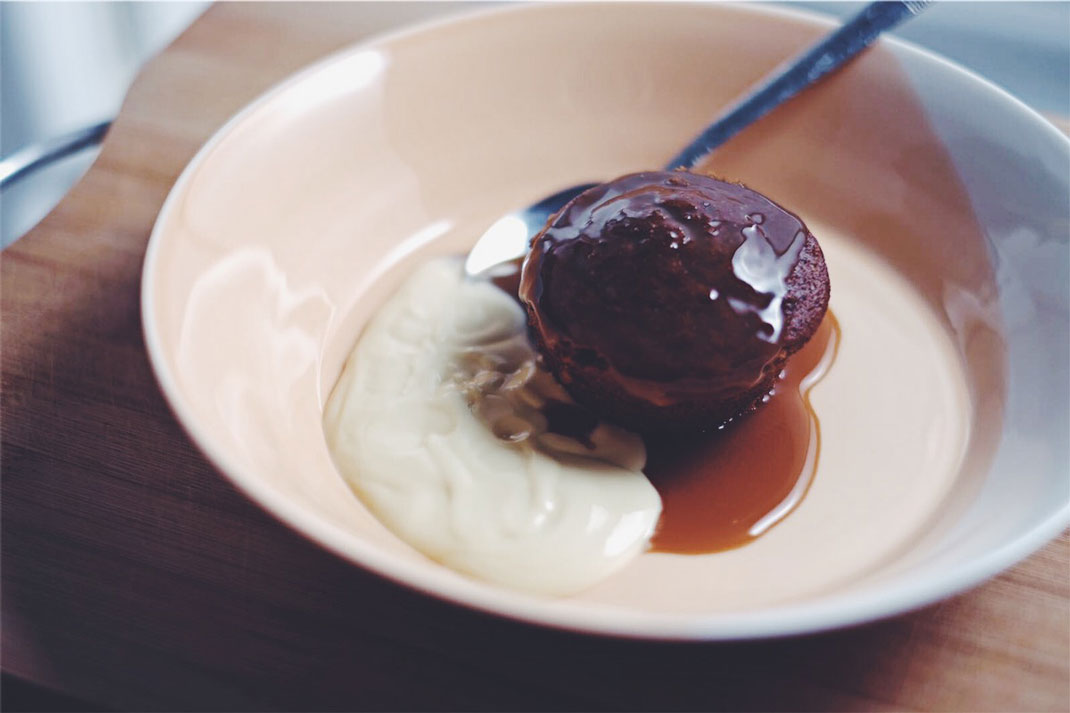 I used this recipe by Lazy Cat Kitchen, with just a few small tweaks made according to what I had in the house. Whilst these puddings are a little more indulgent than what I’d eat normally (mostly due to the large amount of brown sugar that went into them!) I know they were still better than anything I could have picked up from a store. They contained some goodness from the apple puree and date puree, which is what helped to make them so moist. I made the toffee sauce at my mum’s house, melting brown sugar and coconut milk together until a runny caramel formed. I enjoyed the whole thing with a dollop of Oatly‘s vanilla custard – just one of the brand’s latest new products. 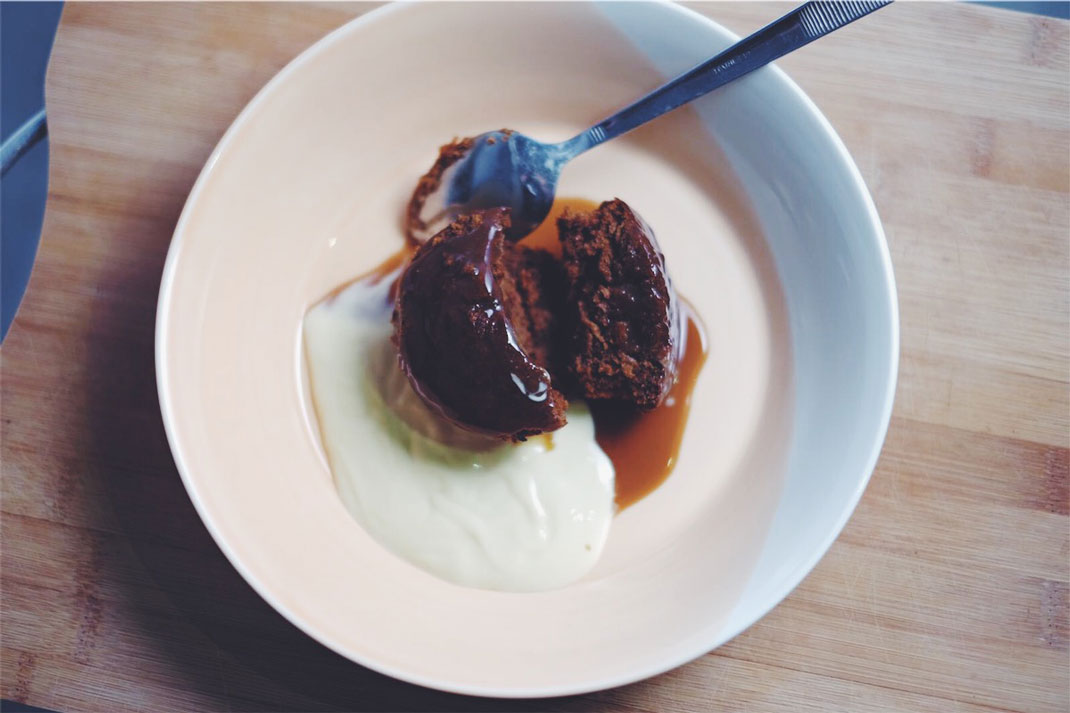 Shortly after dessert my sister and brother-in-law arrived and we finally all exchanged gifts. This wasn’t easy as there were quite a few of us and the living room filled up very quickly with stacks of gifts and discarded wrapping paper. We’ve always taken turns opening presents so it can sometimes be a lengthy process. In this instance it took three hours!! 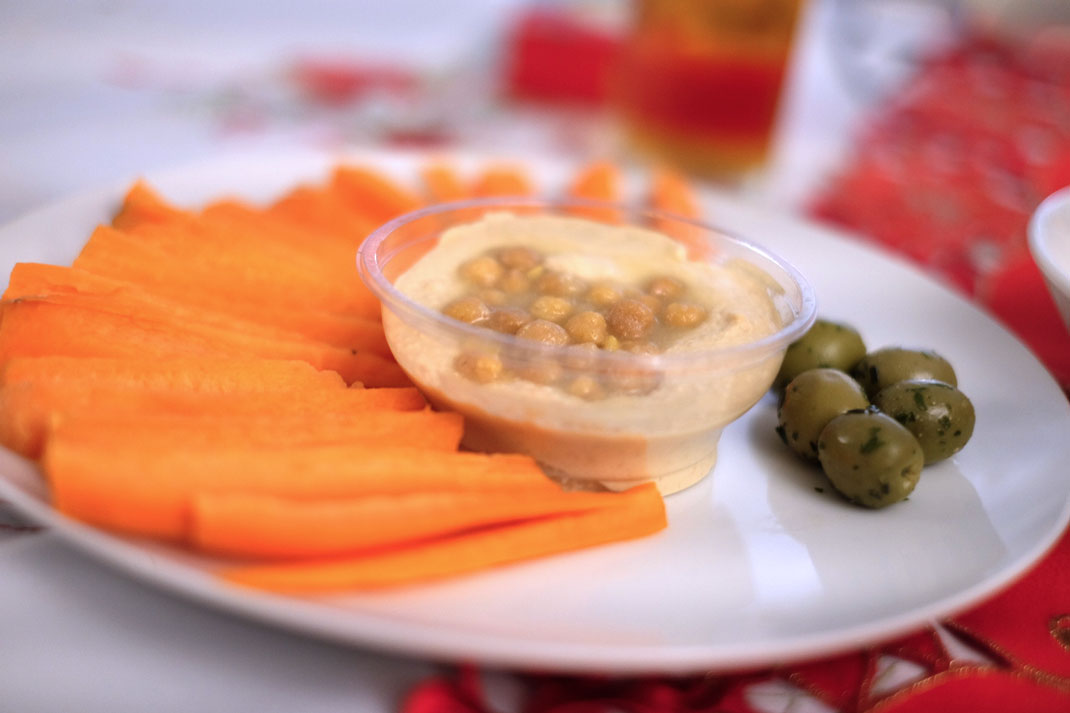 Later we sat down around the table to play party games with some nibbles. My mum had bought me some olives and hummus so I munched on these with a few carrot sticks I cut up quickly. I also broke into the two boxes of Booja Booja truffles I had been bought for Christmas – ‘rum sozzled’ sultana and hazelnut. Booja Booja are only like my favourite truffles EVER, it would just not have been Christmas Day without them. 😉 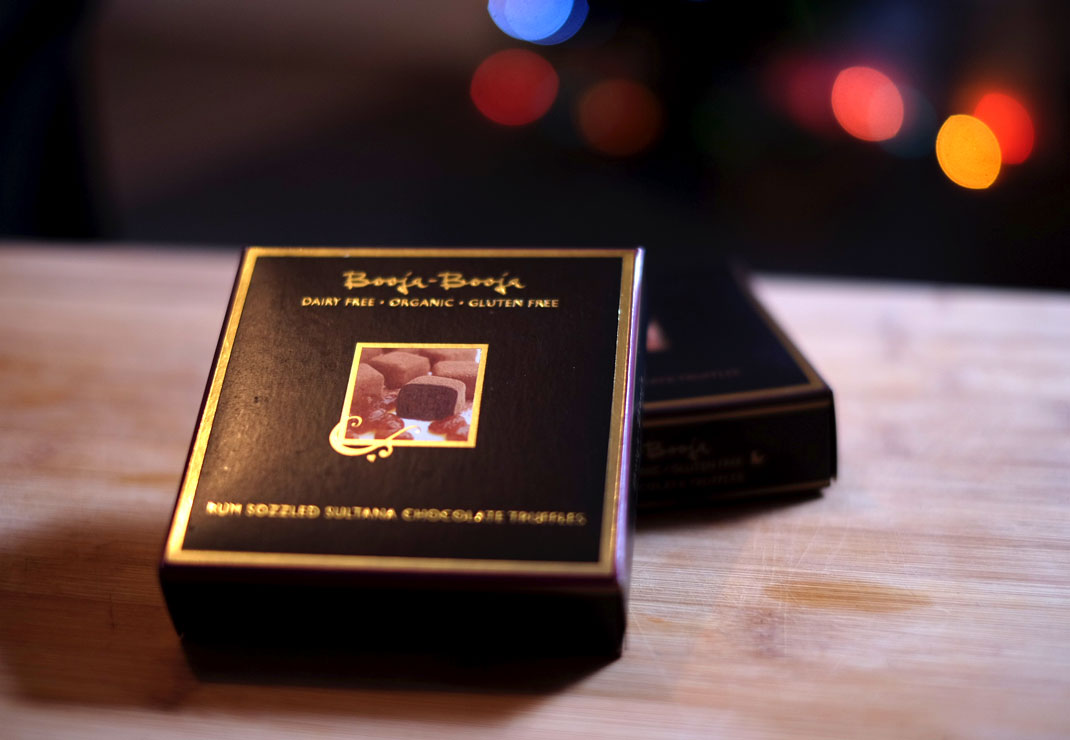 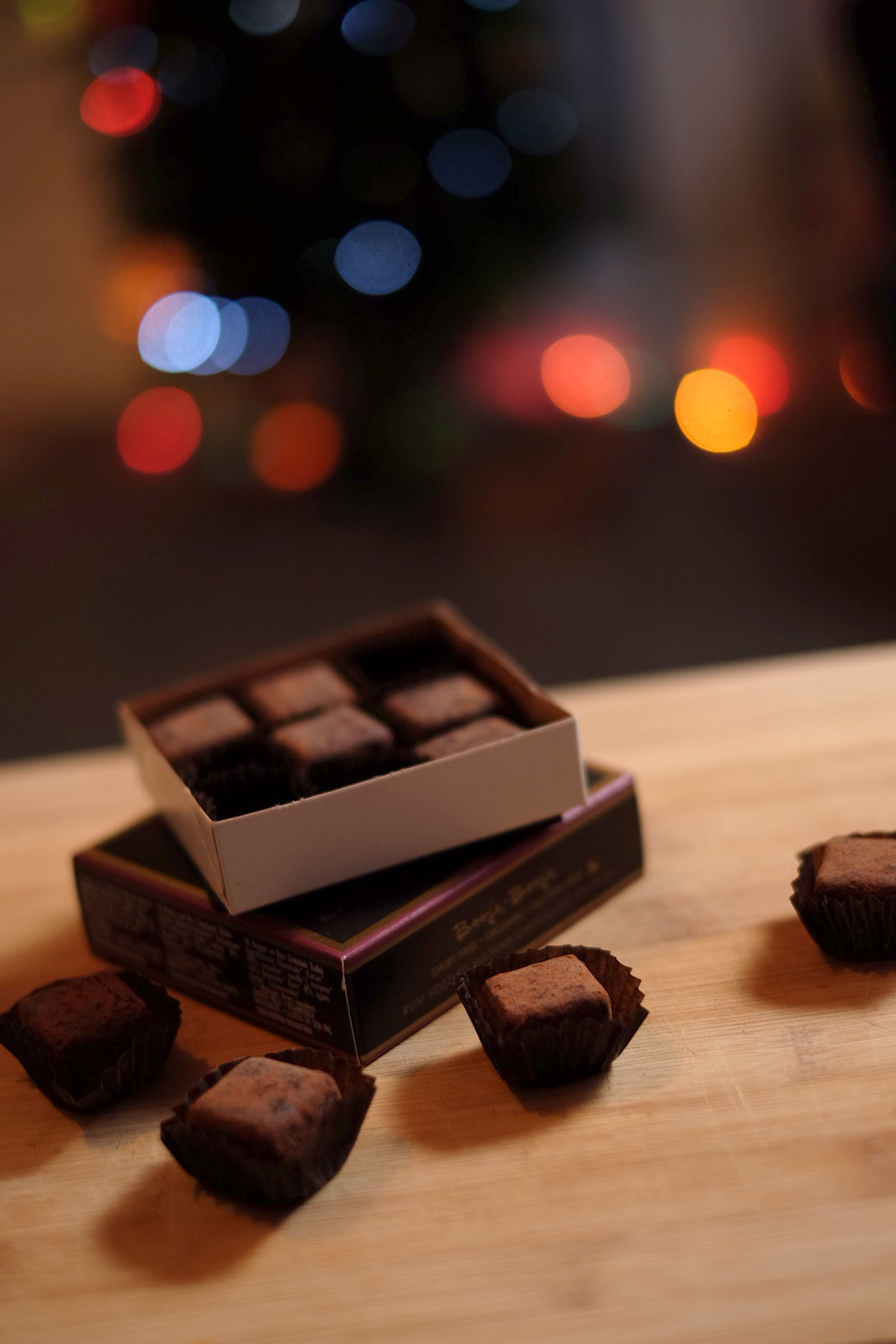 Around 11:30pm everyone was feeling a bit peckish, so we got up and made sandwiches with the Christmas dinner leftovers. For me this meant leftover nut roast with my dad’s homemade sage stuffing on seeded bread, with just a liiittle bit of piccallili in the middle. Piccallili has always been one of those nostalgic foods I ate growing up so eating some on a Christmas Day sandwich was sort of a must.

Throughout the day I drank mostly water, green tea and Schloer – a yummy fizzy juice you’d give to kids in place of wine :’) I wasn’t drinking today but to be perfectly honest, this Schloer stuff tasted way better! I ended the day when we got home with a peppermint tea.

What did you guys all eat on Christmas Day? Leave a comment below 🙂