I feel it takes a special kind of place to perfect a vegan afternoon tea.

It’s not that making afternoon tea vegan is a necessarily difficult thing, per se. But it just seems to be one of those experiences that some places stumble on…or forget about entirely.

The truth is that afternoon tea still remains one of those quintessentially ‘British’ things that is always a welcome way to spend an afternoon. Tea, cake, and in some places, even champagne! What could be better?

For vegans, however, this isn’t always a readily available treat, and when it is, it may not always be the usual extravagant feast one is expecting!

I have, quite literally, had an afternoon tea that was made almost entirely of fruit. It’s not that I don’t like my fruit – I really do. But afternoon tea should be something special…indulgent…a treat. This particular one was not what I had had in mind.

Fortunately, more and more establishments are now catering to this growing niche, and I was lucky enough to visit one of them last month when my mum treated me, my sister and my brother’s fiance to a girly afternoon tea. 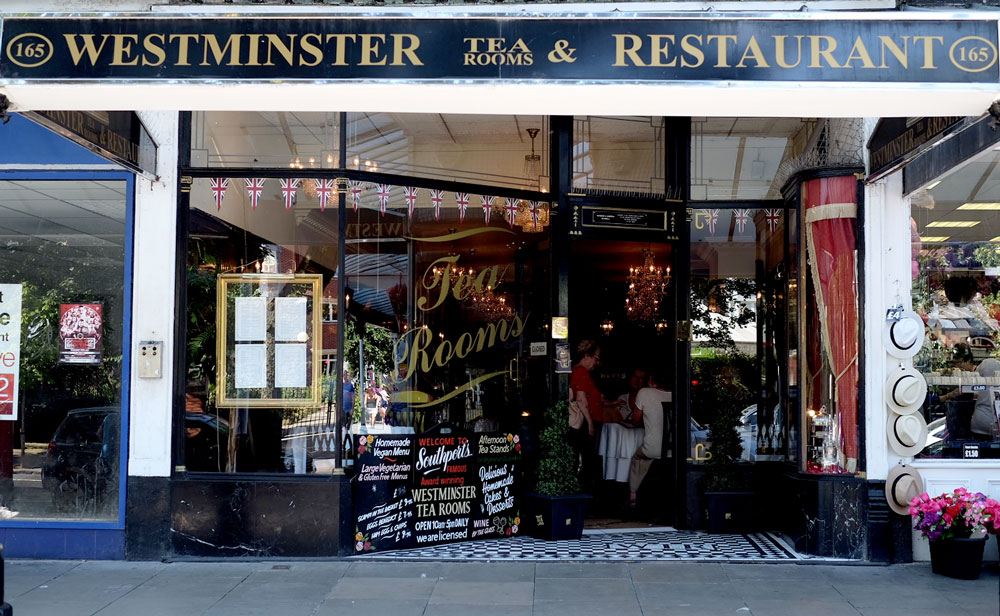 Located on Southport’s main high street, Westminster Tea Rooms is a pleasing little tea shop and cafe that just so happens to do a fantastic afternoon tea for vegans.

With its classic, wood-panel interiors and traditional-style furniture, it’s easy to feel like you’ve stepped back in time, with the soft 50s-era music playing in the background making you feel like you’re in an old black and white movie.

It’s this styling and decor that gives Westminster Tea Rooms its heartwarming quaintness, which is only further enhanced by the polite and attentive staff. 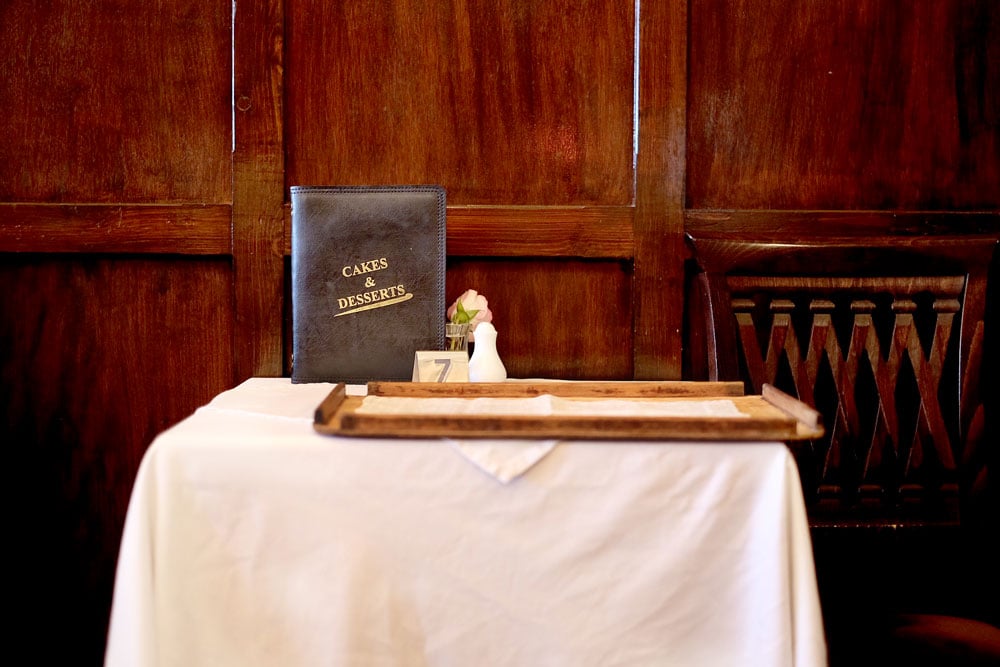 Though I’d never been to Westminster myself before, it’s a place my parents have enjoyed frequently on their regular jaunts to Southport, and they were always telling me about the dozens of vegan options available there.

On arriving and seeing the menu for myself, I was indeed impressed. Westminster offers not only a number of vegan sandwiches and cakes; they also provide a range of hot dishes including vegan Shepherd’s Pie and a roast dinner, salads, and a choice of vegan ice cream flavours.

Quaint and traditional the style of Westminster might be, but its food choices are undoubtedly progressive. 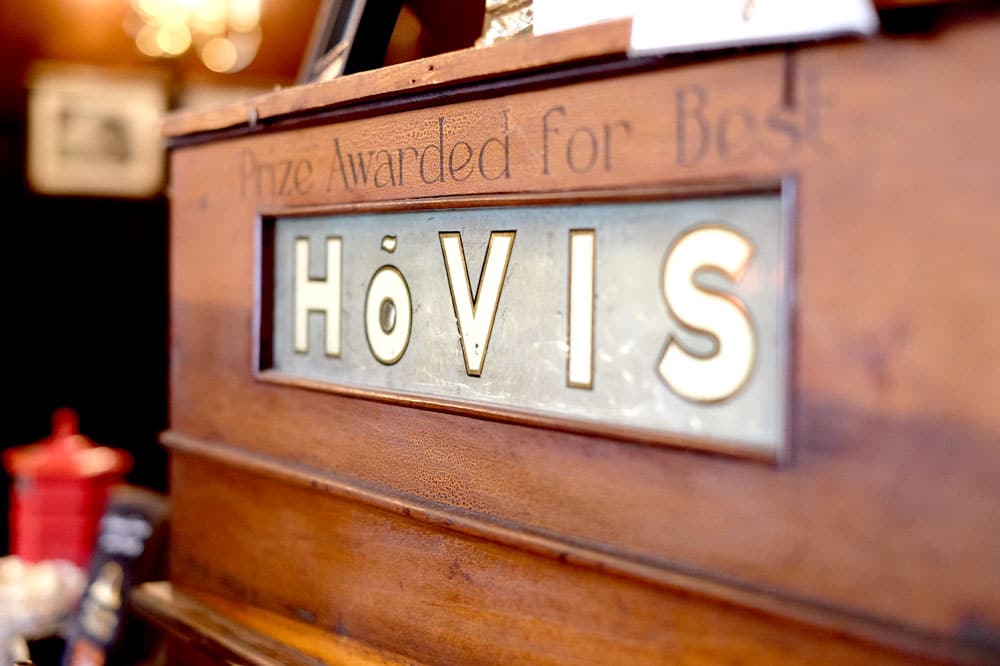 Westminster serves up three types of vegan afternoon tea: Regal (which is a homemade scone with coconut cream, jam and vegan butter); Mayfair (vegan cheese on toast, with the scone mentioned above) and Duchess, which includes all the trimmings!

Naturally I went for the Duchess, and it was quite possibly one of the best meals I’ve ever had in a non-vegan restaurant.

I received four sandwiches, each one with a creative and unique filling, which I honestly didn’t expect. One of them was hummus and mediterranean veg (possibly one of my favourites) but after that they got more interesting – vegan cheese and grape; vegan luncheon meat with piccalilli, and vegan smoked salmon with watercress (I don’t know how they did it either). 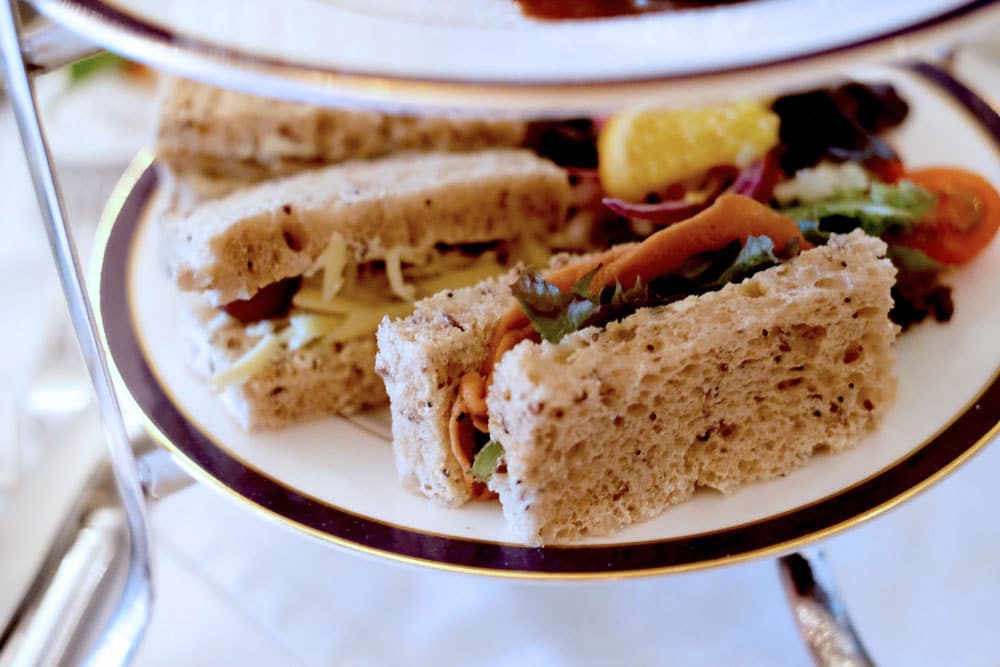 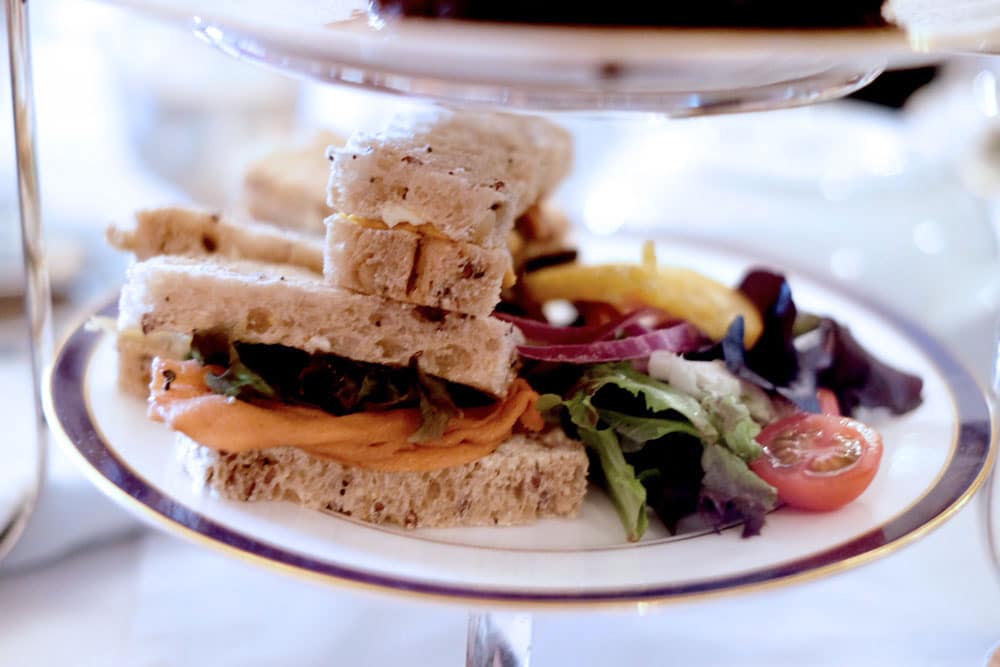 Each sandwich was absolutely delicious, and it had me wishing they were larger than their delicate finger-size.

Next up was the scone. Perched on the top tier of the stand, it was covered with a curved dinner lid, which was intended to keep it warm.

Indeed, it seemed to work, as my scone was not just warm, but hot like it had just come from the oven. It had been years since I had this traditional baked treat (certainly not since becoming vegan) and so I was most looking forward to it. Next to the scone were two small pots containing coconut cream and strawberry jam. Combined with the vegan spread that had earlier been laid out on the table, I was able to fix myself a pretty delightful cream tea – no animals needed! I had never really been one for eating cream on a scone anyway, but the coconut cream was different. It felt cool and creamy and offered a pleasant flavour to accompany the fruitiness of the jam. I was in cream tea heaven. 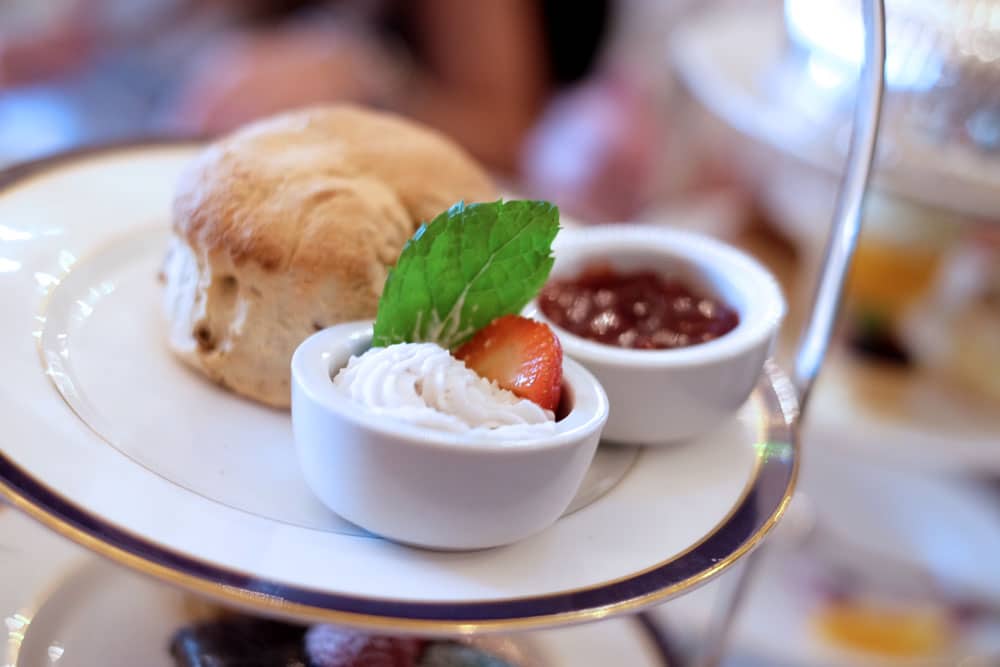 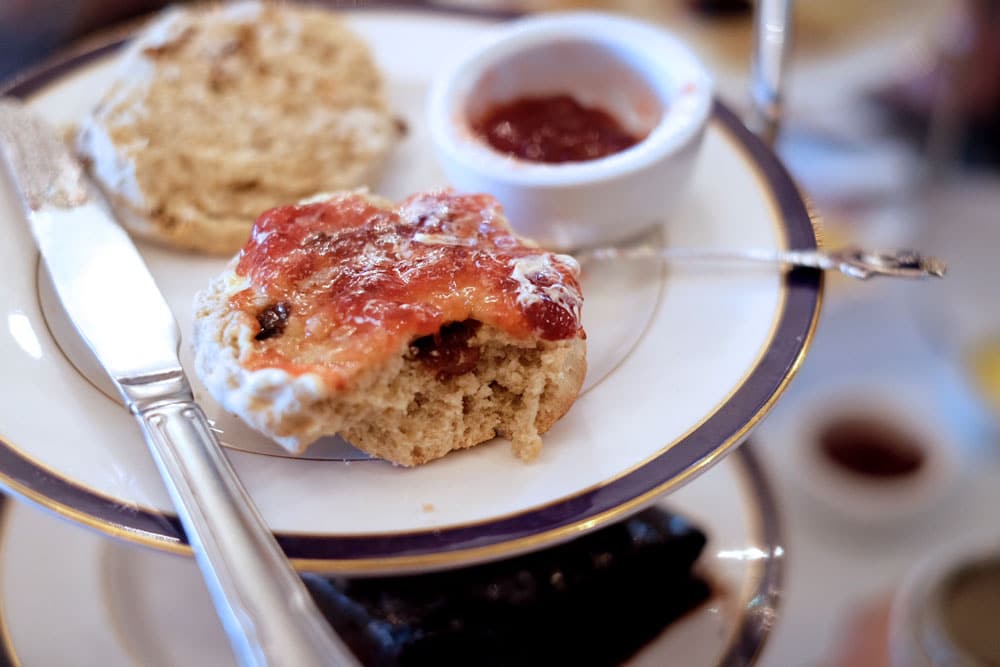 Once we’d all polished off our sandwiches and scones, we were all getting rather full. But I still managed to delve into the fruit tart on my middle tier, whilst the others nibbled on their mini-cakes and french macaroons. The tart was lovely, but unfortunately its coconut cream filling had started to melt a little due to the heat (it was an incredibly hot day).

Luckily, I was able to wolf it down before it melted any further, but I would have been keen to see what it was like when still chilled.

The chocolate cake was the one thing I was not able to finish, but I did take it home with me. Later that night Christian and I shared it between us, so I can absolutely vouch for its moist richness and delicious fudgy topping. 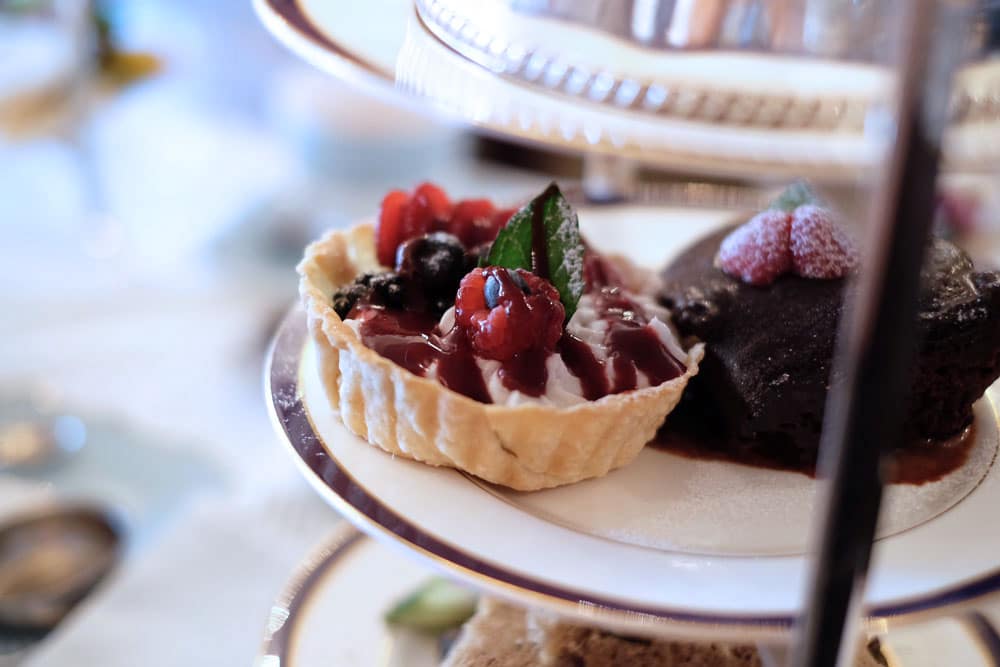 All of the afternoon teas were served on those adorable metal cake stands, where everything had its own tier.

Our loose leaf teas arrived in individual teapots with matching tea cups, accompanied with cute tea strainers through which to pour the tea. If we wanted more, all we had to do was ask for a top-up of hot water, but the teapots were quite sizeable, so I found I had plenty.

If you’re ever looking for a place to enjoy a beautiful afternoon tea, or even just passing through Southport, I would highly recommend you give Westminster Tea Rooms a try. From the calm, relaxing atmosphere and patient waiting staff, to the variety of foods on offer and the way everything is presented…it’s an adorable and dare I say it, rare place.

If you’re out with a group that eat different diets, you’ll be more than taken care of at Westminster as their menu has options for vegans, vegetarians and those who are gluten-free.

And though I was blown away by this afternoon tea, I can’t wait till I’m able to head back and try out the rest of what the vegan menu has to offer. 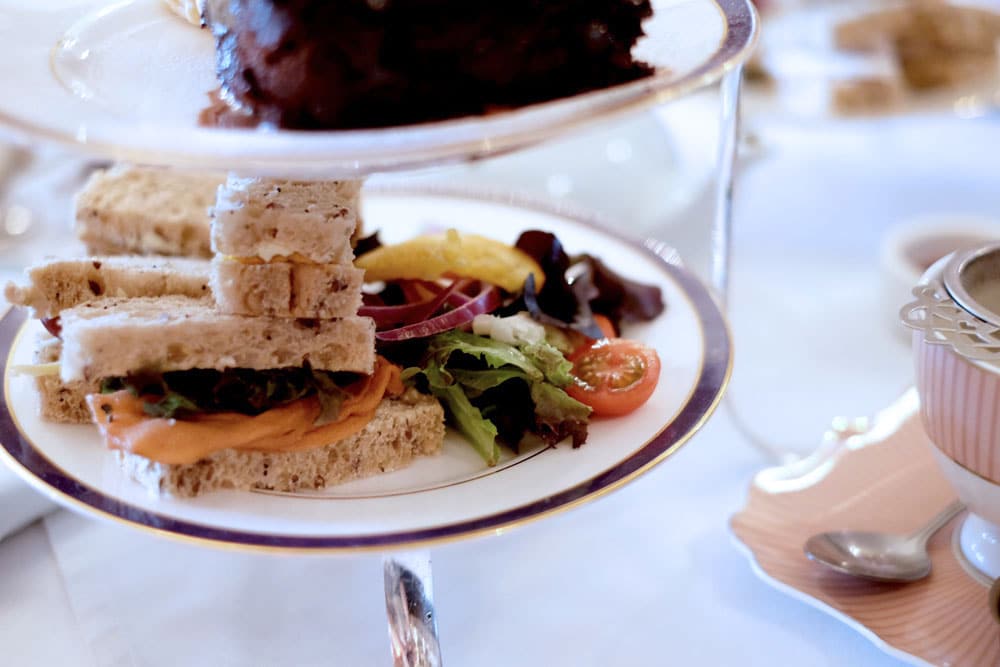 Have you ever had an amazing vegan afternoon tea? Tell me about your experience in the comments below!