Wagamama has probably always been one of my favourite chain restaurants.

As one of the few restaurants that promises to cater to nut allergies, it was the place my bandmates and I would regularly go to eat after practice, and I always thought the vegan options were pretty great.

Fast-forward a couple of years later, and the vegan movement is rapidly picking up speed. Everywhere you look, restaurants are launching exclusively vegan menus, with good old Wagamama being one of them.

I was delighted a couple of weeks ago to be invited to a tasting event to celebrate the opening of a new Wagamama restaurant in Speke, Liverpool. The event focused exclusively on the restaurant’s new vegetarian and vegan menus, which have been specially formulated to offer a variety of delicious, flavourful dishes for those wanting to leave meat off their plate.

As expected, it was a yummy, fun-filled evening, and my boyfriend and I were probably ploughed with more food than we could manage! It was really exciting getting to try whatever we wanted from the menu; as well as chat to the head chef Muthu who had been part of the team that created the dishes, and the servers themselves, one of whom was also vegan.

We also had a tutorial on writing haikus from a local haiku-writer, and got some free tote bags to take home (which I was thrilled to add to my collection, because #zerowaste).

Above all, it was a great chance to see what Wagamama’s is doing to cater to more varied diets, as well as learn more about their dedication to providing dishes that adhere to any strict vegan’s expectations, yet are irresistible enough for everyone to enjoy. (Hey, it got my boyfriend eating vegetables, so that said something!)

To start with, everyone was given a bowl of warm edamame with salt to nibble on, while we waited for the rest of the food to arrive. I also got to try some of Wagamama’s infused gin with tonic water, which is a sure a treat for gin lovers everywhere, and Christian had a Natsu – Wagamama’s own brand of craft beer with passionfruit.

Though neither of us are big drinkers, both Christian and I enjoyed the alcoholic beverages that Wagamama had to offer – each vegan-friendly of course. Then, our choice of side/starter dishes came – Bang Bang cauliflower, a plate of veggie gyoza, and two steamed hirata buns, which we were probably most excited to try.

The Bang Bang Cauliflower usually wouldn’t be Christian’s cup of tea, as he neither enjoys cauliflower nor spicy food. However, with the rave reviews and positive encouragement of our two servers, he was brave enough to give it a try, and both of us were pleasantly surprised! The crispy wok-fried cauliflower in a Firecracker sauce gave the tastebuds plenty to experience – both sweet, savoury and a slight kickback of heat afterwards (this was its only downside, as we felt it could be too spicy for some people to enjoy).

A note about the Bang Bang Cauliflower

The Bang Bang Cauliflower is actually part of the vegetarian menu at Wagamama’s and not vegan, and this is because the orange juice used in the sauce is from oranges that have been externally waxed with shellac.

Though some plant-based eaters wouldn’t be put off by this (as it doesn’t directly involve or use animals in the cooking of the dish), it is for this reason Wagamama decided to leave it off the vegan menu, which I am actually impressed by. Though I did have a taste of the dish from Chris’ plate, it is not a dish I would order myself for this reason.

Chef Muthu explained that they are currently trying to source the orange juice from a more vegan-friendly supplier, and that as soon as they have done so, it will become part of the vegan menu. 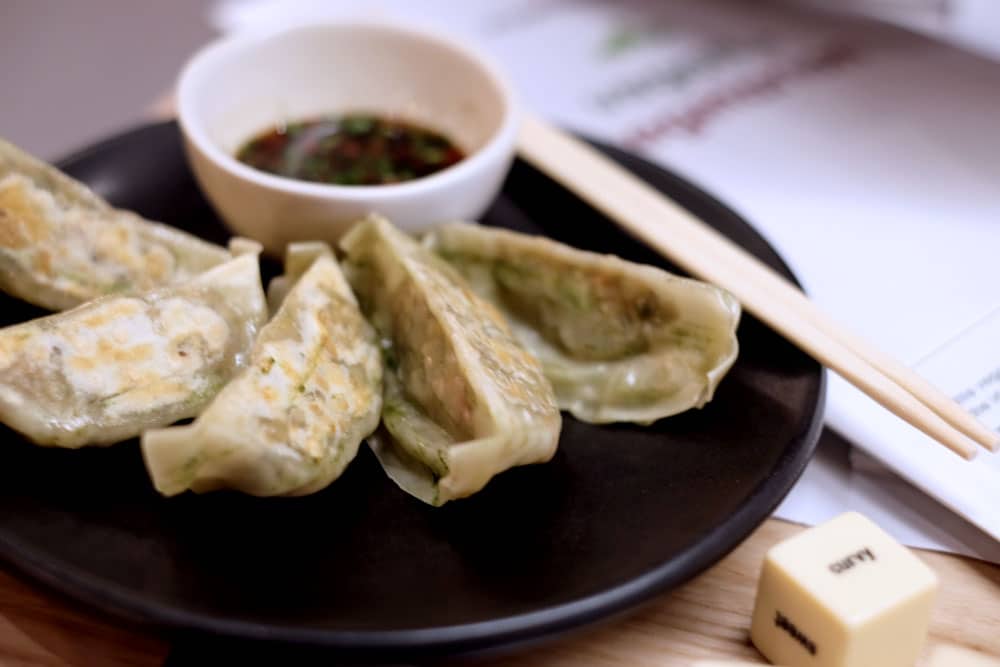 As expected, the vegetable gyoza (steamed asian dumplings) were yummy. I fully believe you can rarely go wrong with veggie dumplings as they are such a basic yet delicious dish!

The real star of the show, however, HAD to be the mixed mushroom and panko aubergine hirata buns. Both Chris and I concluded that they were our favourite dish of the evening, and he doesn’t even like aubergine! From the light fluffiness of the hirata bun itself, to the tanginess of the pickled shiitake mushrooms and the warm crispiness of the aubergine, these little things are a must-try for anybody – vegan or not! Honestly, we couldn’t get enough…and we were lucky because the chef brought us an extra plate! 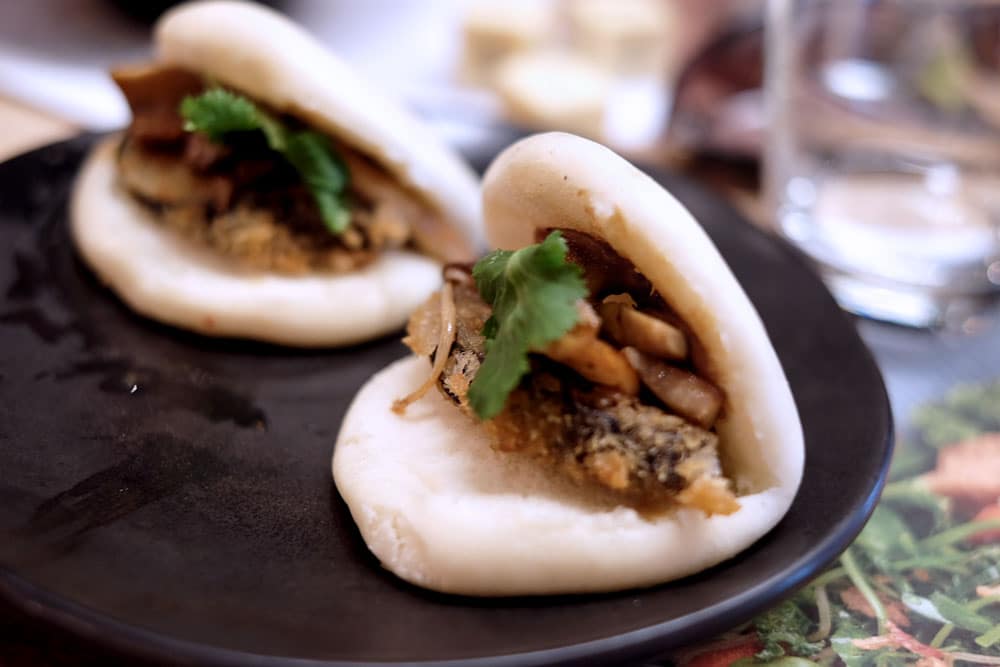 Wagamama has done a fabulous job of bringing more vegan-friendly main dishes to the table. Though the chain has always had strong vegetarian options, many of the noodle dishes contained egg noodles, so therefore weren’t suitable for vegans.

Not only has Wagamama revamped some of the vegetarian dishes to omit the egg (such as the Yasai Soba and the Pad Thai, both now available with rice or udon noodles), they’ve also introduced some exciting new additions, like the Samla curry, the Kare Burosu and the Tofu Harusame glass noodle salad.

The dish we were both most excited about trying though, was of course the Vegatsu – Wagamama’s famous Katsu curry made with seitan instead of chicken. Though the restaurant has always offered a Yasai Katsu (involving panko-fried vegetables), the Vegatsu gives people that ‘meaty’ texture that they might crave, which means it can be enjoyed by those who aren’t that excited about vegetables (like my boyfriend) or perhaps meat-eaters that want to try a kinder option.

Needless to say, the Vegatsu was every bit as delicious as we thought it would be. The seitan was surprisingly moist and tender, which Muthu explained was a big aim for the dish, based off initial feedback they had during its testing. Then of course there’s the Katsu curry sauce which, as we all know, is always winning! 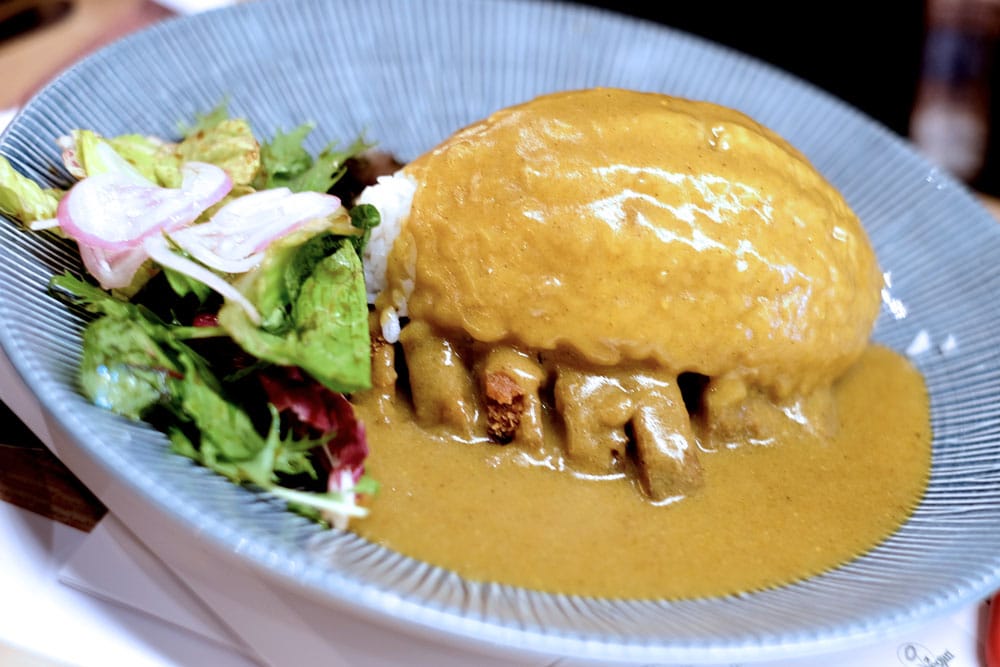 I fancied a noodle dish, so I ordered the Pad Thai, having never been able to eat it previously because of its egg content. Though it wasn’t the most memorable dish of the evening, it was light and citrusy, which is great for people who like that sort of thing. The rice noodles sat perfectly with the tofu and veggies, and you can also decide to have it with the thicker udon noodles too, if you like.

I may have struggled to finish the Pad Thai, however, due to feeling so full by this point…not to mention stealing a lot of my boyfriend’s Vegatsu! 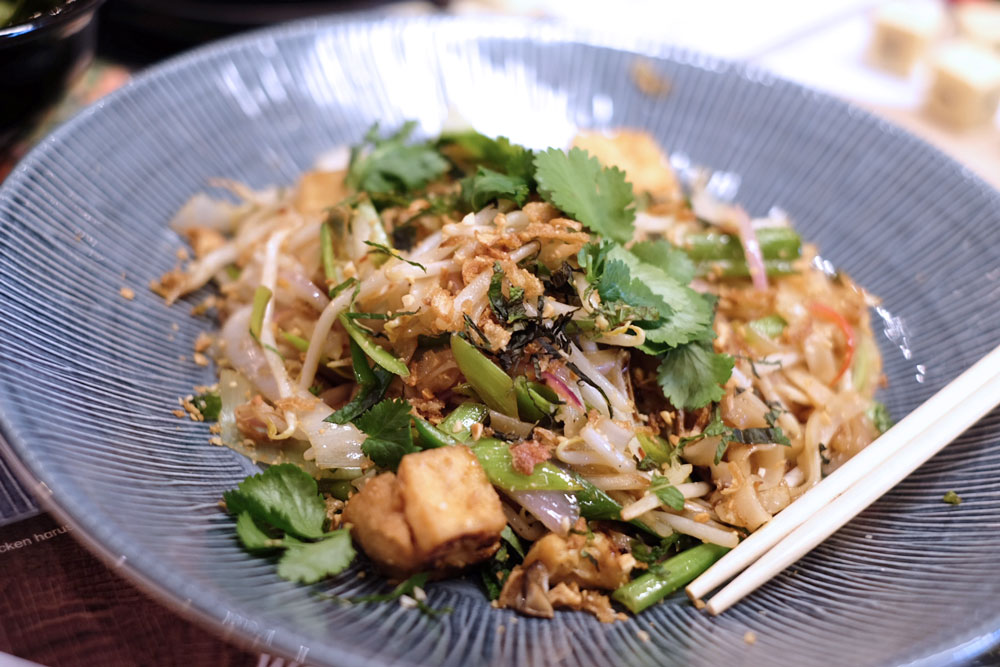 Currently, the vegan desserts Wagamama has to offer are a choice of sorbets – lemongrass & lime or pink guava & passionfruit. I was slightly disappointed about this as I’m not really a sorbet girl – and Chris was tucking into a fine-looking white chocolate & ginger cheesecake from the veggie menu!

However, our servers explained that Wagamama is in the process of testing several flavours of vegan ice-cream, which will be available on the menu soon. In the meantime I simply watched Chris enjoy his cheesecake…and we even received an extra slice to take home!

I learned so much from this tasting event at Wagamama, and it was great to learn how much effort goes into creating the food that we now love.

For example, I learned that:

Have you tried any of the new veggie/vegan dishes at Wagamama yet? What did you think? Let me know your experiences in the comments below!