Earlier this year, my boyfriend and I went on a 10 day road trip around north Italy, and man, was it a trip! Among all of the history, culture, landscapes, food and people we experienced, it was also my first time travelling as a fully fledged vegan, which I was particularly pretty excited about.

“With ease,” was my answer to the first question, and “Not at all,” was my response to the second. The truth being that whilst a large part of the Italian cuisine IS based largely around cheese and dairy, we also have it to thank for plenty of other nutritional gems. too. Fresh fruit, tasty mediterranean vegetables, amazing herb blends and delectably fresh breads and grains are all base staples of the Italian dishes we’ve come to love and adore. Isn’t it so funny how people forget the simple foundations, once animal products enter the flow? 😉

Spending just a couple of nights in each city, I was only able to touch on the very tip of the incredible vegan eateries popping up all over Italy. Don’t let anybody tell you that Italy is a cheese fest – it’s got one of the best vegan offerings as a country, in some ways even better than the UK! With the help of Happy Cow and Google Maps, we were able to track down some awesome vegan spots, as well as find places willing to cater to vegan diets, that weren’t listed online.

Here were some of my favourites. 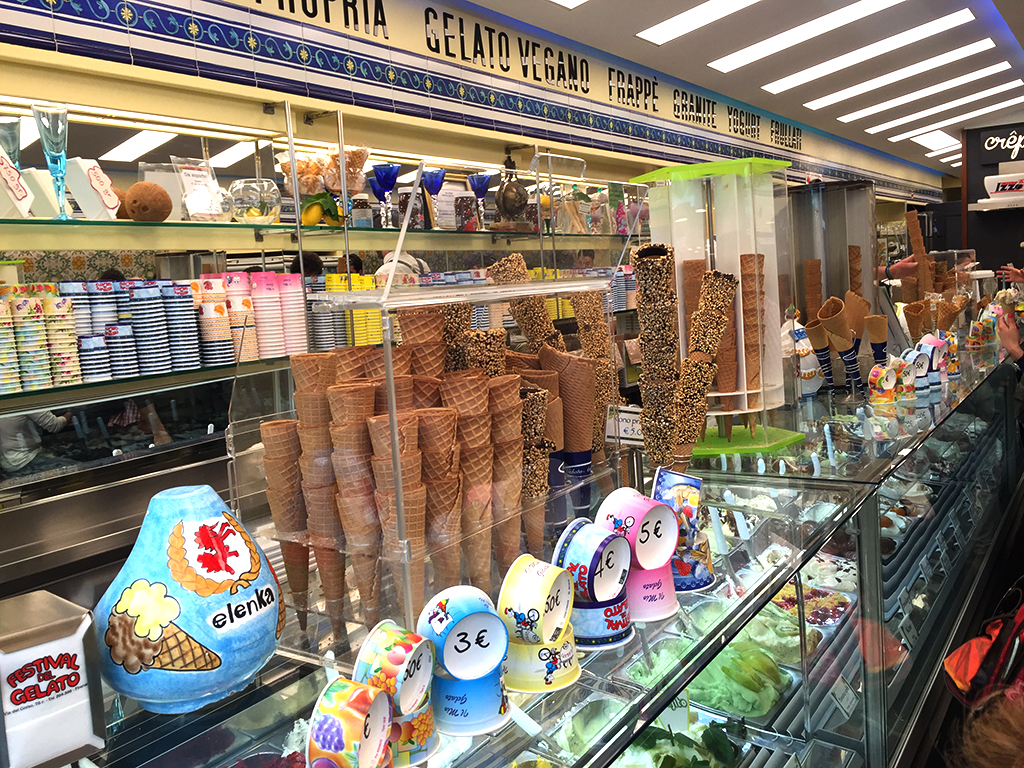 Festival del Gelato was our first vegan ice cream stop on our second evening in Florence. It had been a little too hectic to find ice cream the night before, and although finding vegan ice cream turned out to be much easier than we thought, we still wanted to do our research.

Based in the midst of one of Florence’s busiest side streets Via del Corso, FDG was simply brimming with tourists, all hankering to get their hands on the bright and eclectic collection of flavours presented before them. The server I asked was very helpful when it came to vegan flavours – they had a handful of options made from either fruit or rice milk. I chose one scoop each of the hazelnut and dark chocolate and boy, was it worth it. SO indulgently thick and creamy and tasting pretty much nothing like the store-bought stuff.

If I were to describe the two, I would say they tasted together like a fudgey Ferrero Rocher. Certainly a reason to stick FDG on your Florence hitlist. 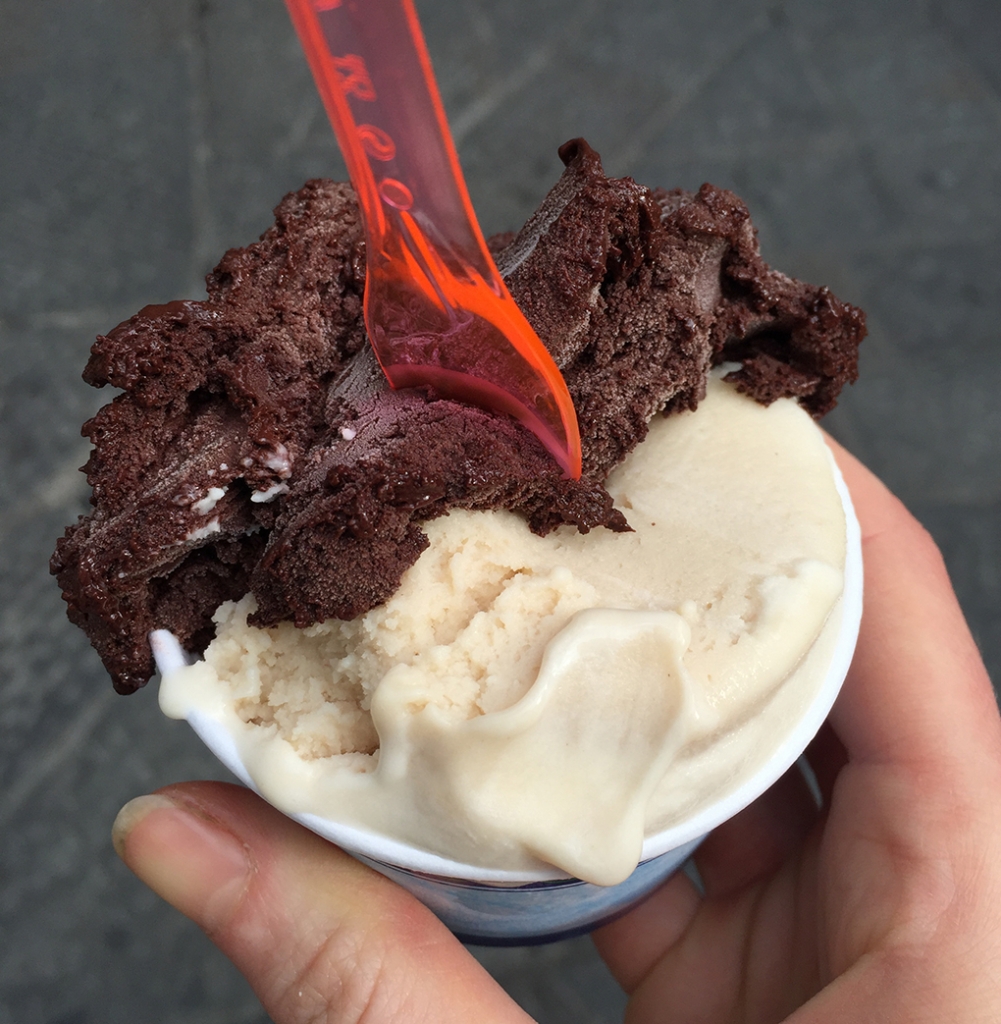 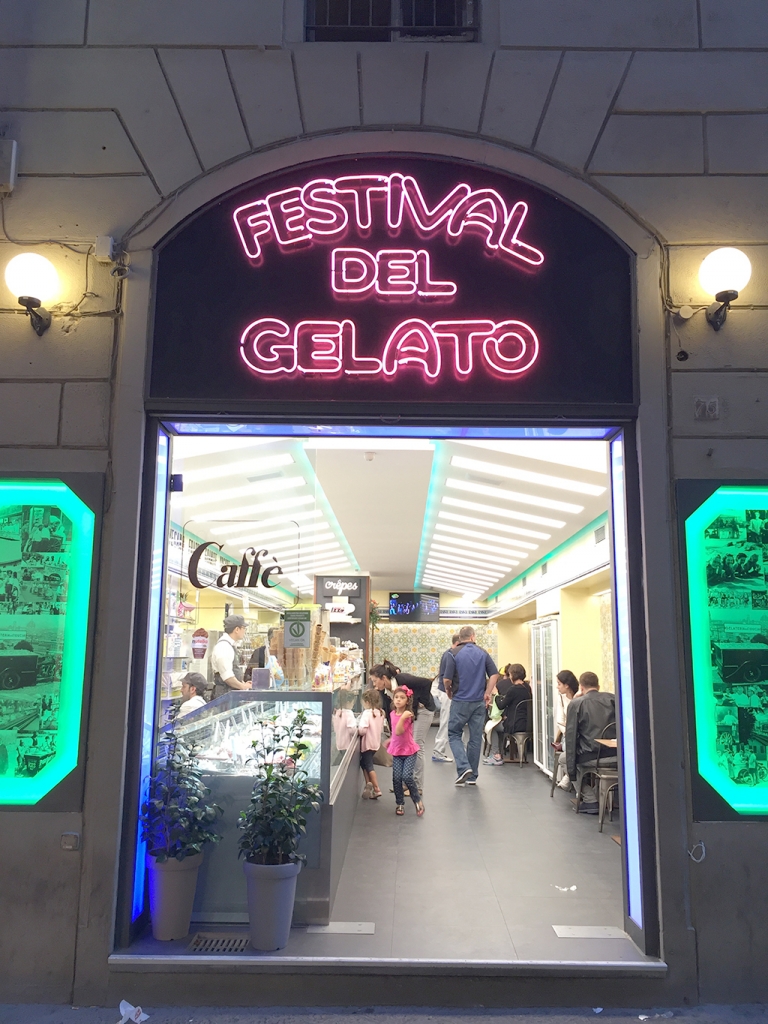 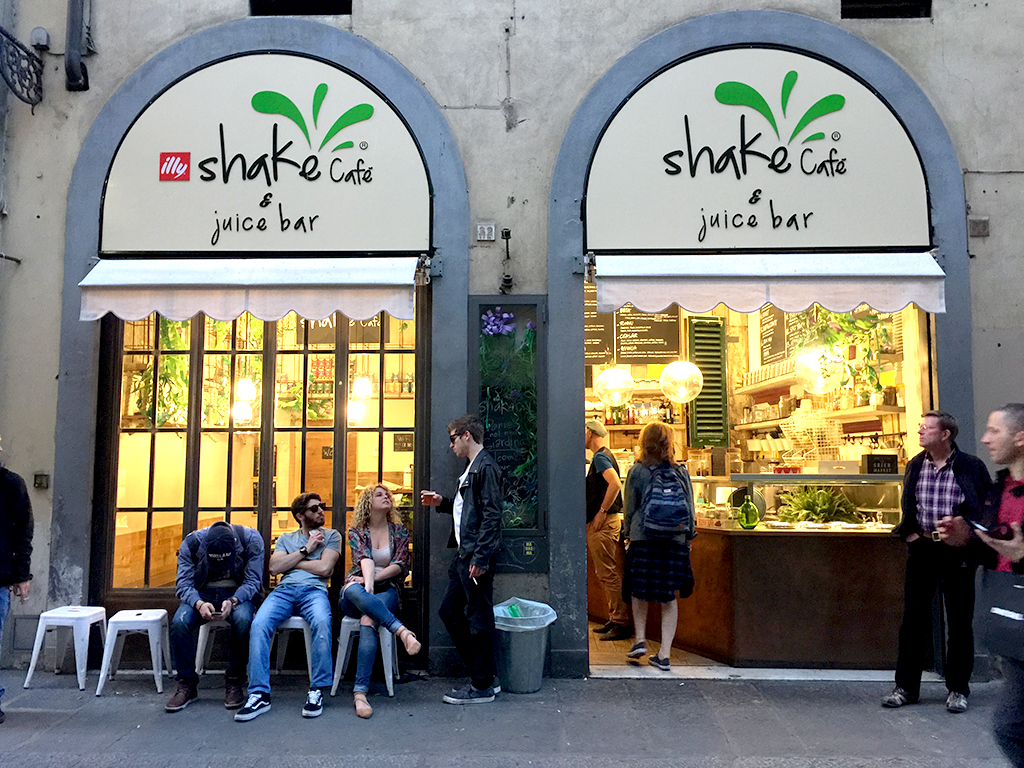 Also located on Via del Corso was the adorable (and surprisingly modern-edge) Shake Cafe. A dedicated cafe and juice bar, it provided a varied menu of juices, smoothies and frozen yoghurts whilst also offering up an impressive display of vegan wraps and salads.

Had it been lunch time, I’d have definitely dived in with a meal; however it was during our post-dinner wander we came across this place, so I opted for a yummy green detox juice instead (fresh straight from the juicer, no less). 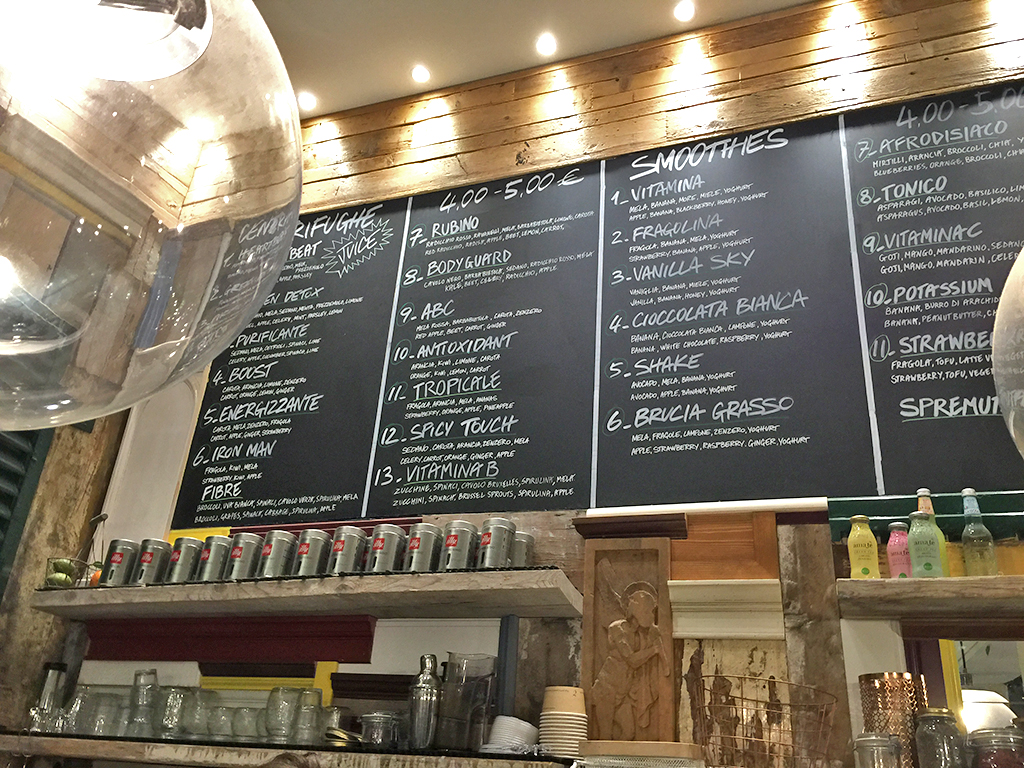 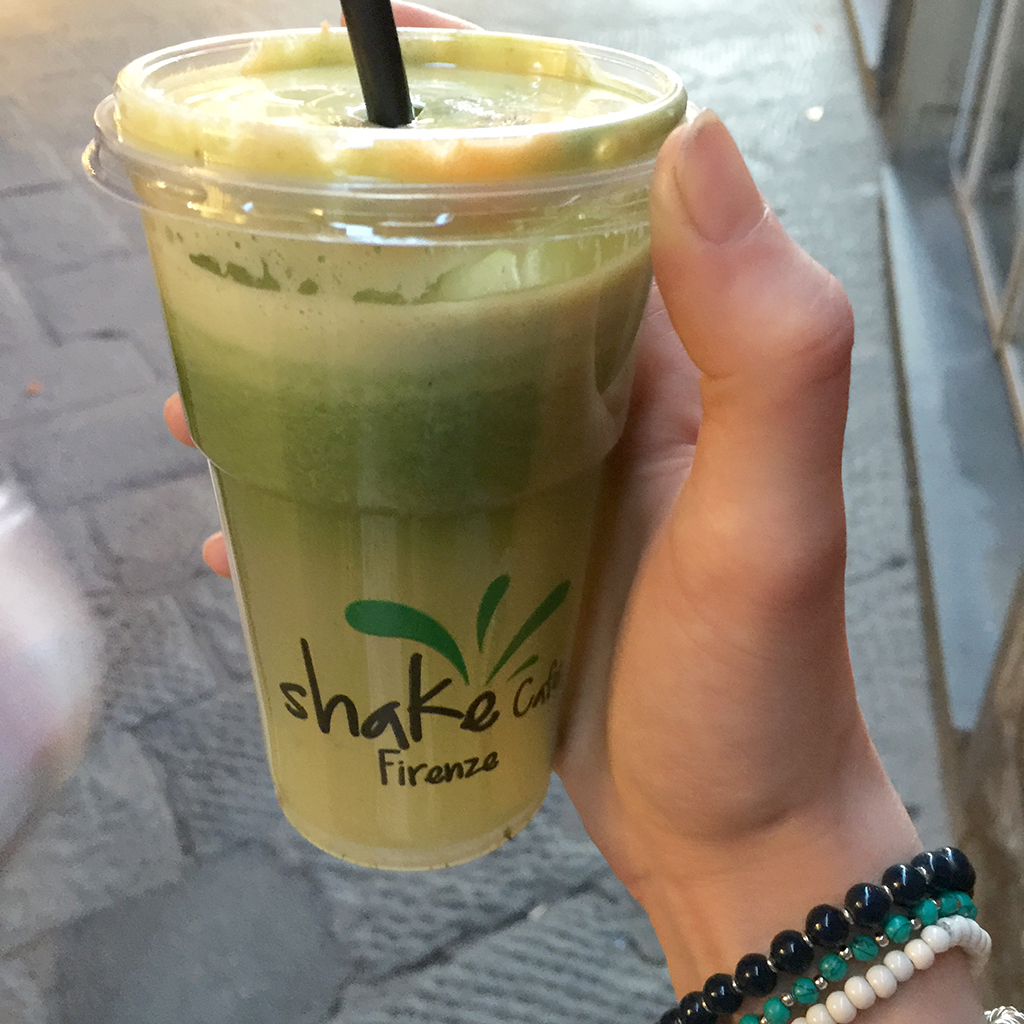 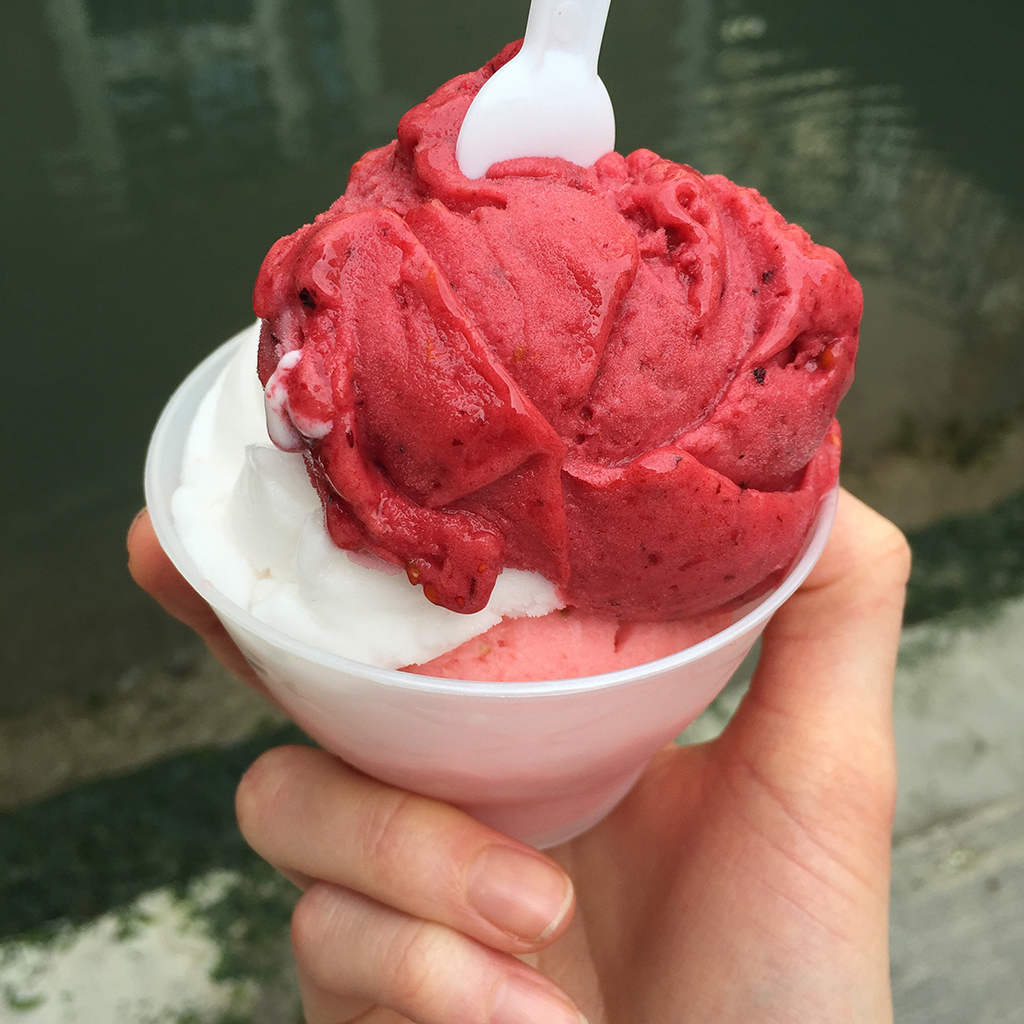 Gelateria il Doge is one of many ice cream parlours in Venice, but sadly one of very few offering vegan flavours. It claims to have the best ice cream in Venice, which I’m sure is true…but I have to say it might have to work a bit harder to win the vegans over!

Their offering was decent even though it was small, and limited to fruit flavours only (hey, we like chocolate fudge too, ya know!). Still, I’d be lying if I said I didn’t enjoy my scoops of strawberry and lemon ice cream whilst sitting by the edge of the canal, and Christian certainly enjoyed his trio of flavours. I should also add that GID’s ice cream is also gluten-free. 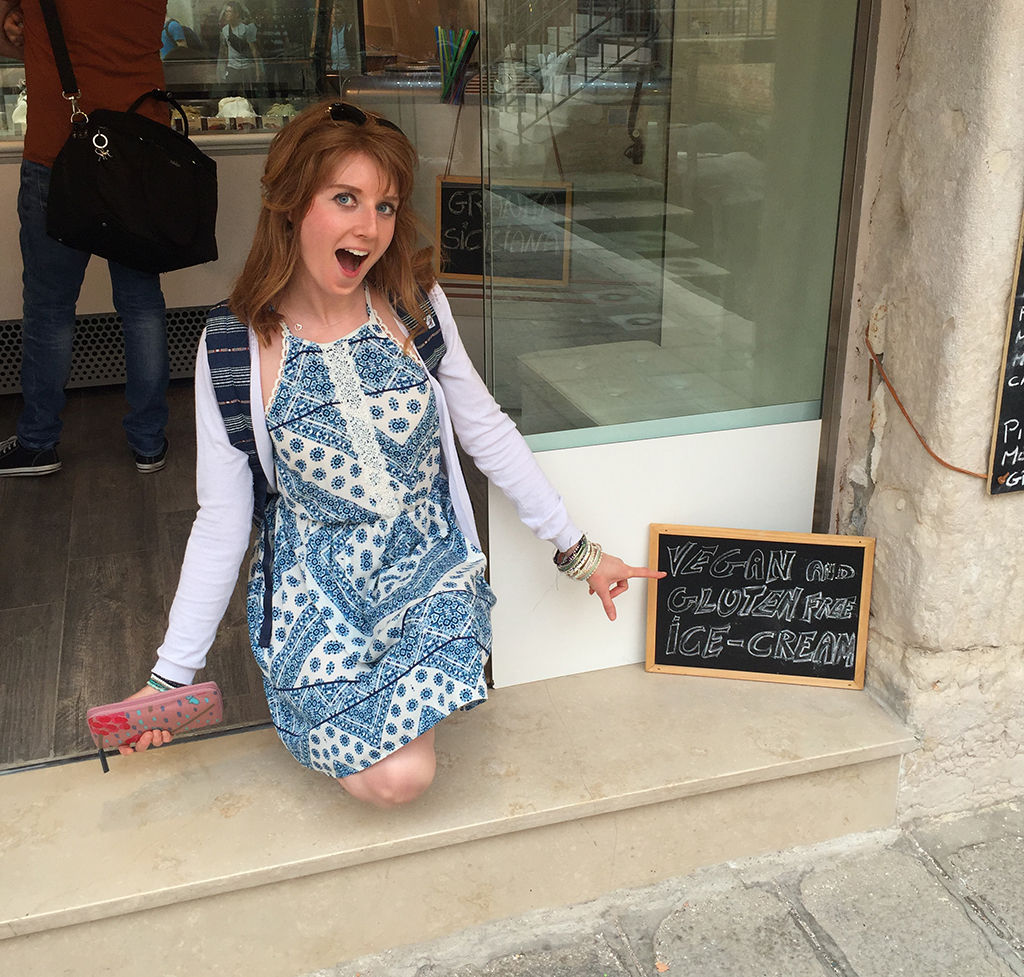 Probably one of my favourite places we visited, Retrobar (or RETRObistro) is a quirky, cool, tricky-to-find-but-pretty-worth it bar and restaurant, suited perfectly to the effortlessly cool vibes of its home city. It’s run by a husband and wife duo – the woman is vegan but her husband is not; he cooks the food and she hosts; she speaks English, he does not.

The menu is great for diners of mixed diets – they have a range of vegan, vegetarian and omnivore dishes, often using seasonal produce. They also have a satisfying range of fresh juices and smoothies AND – get this – they even have vegan DOUGHNUTS. (We got some of these to take away when we left.)

I ordered the chickpea burger which came surprisingly not like a traditional burger – more like a couple of patties with artisan bread, cashew mayo and fresh salad on the side. Every bite was delicious though and I couldn’t really complain. Christian played it safe with a proscuttio ham pizza, but actually noted it was the best pizza he’d had so far since we’d arrived in Italy! Proof that being vegan benefits everyone. Just sayin’.

See Retrobar in action in our Verona vlog. 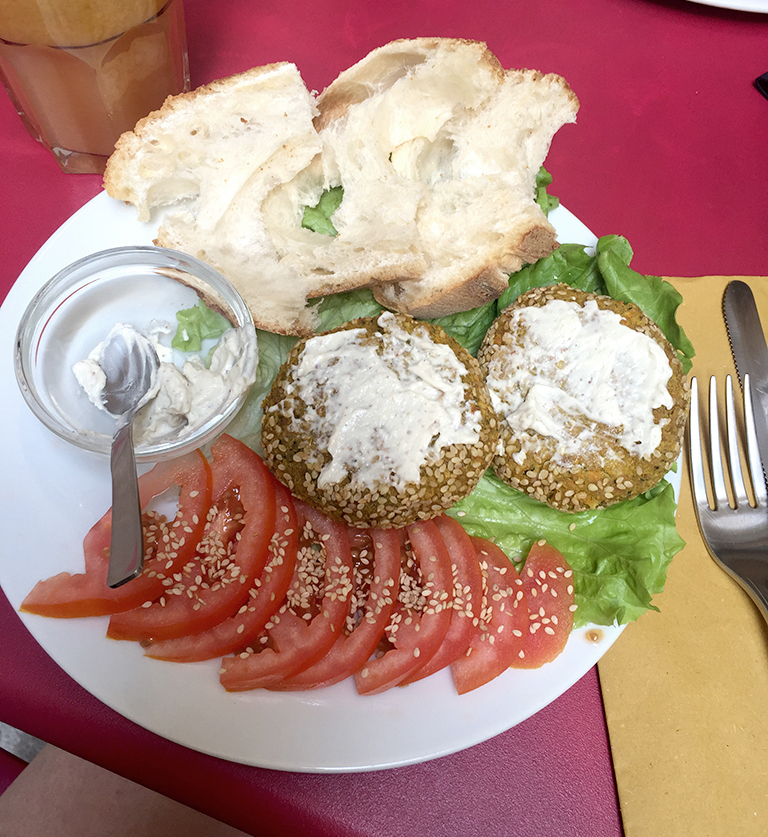 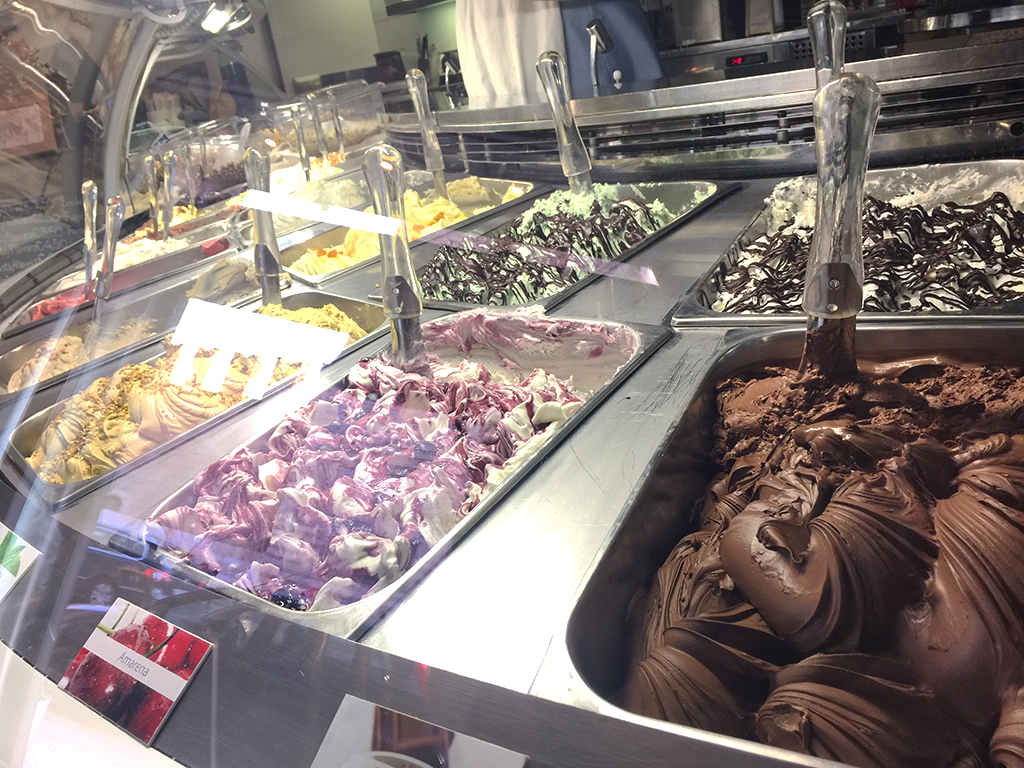 This small ice cream parlour in the centre of Verona provided us with a much needed refresher after a long day wandering around in the sun. Its vegan options are limited, but DO include chocolate – which has to count for something, right? 😉 Other flavours include strawberry and lemon, and it also does fresh popcorn (which I assume can be vegan but didn’t ask).

It was pretty damn good ice cream too – something I especially enjoyed whilst sitting on a high ledge in the Verona Castle walkway, observing the setting sun. 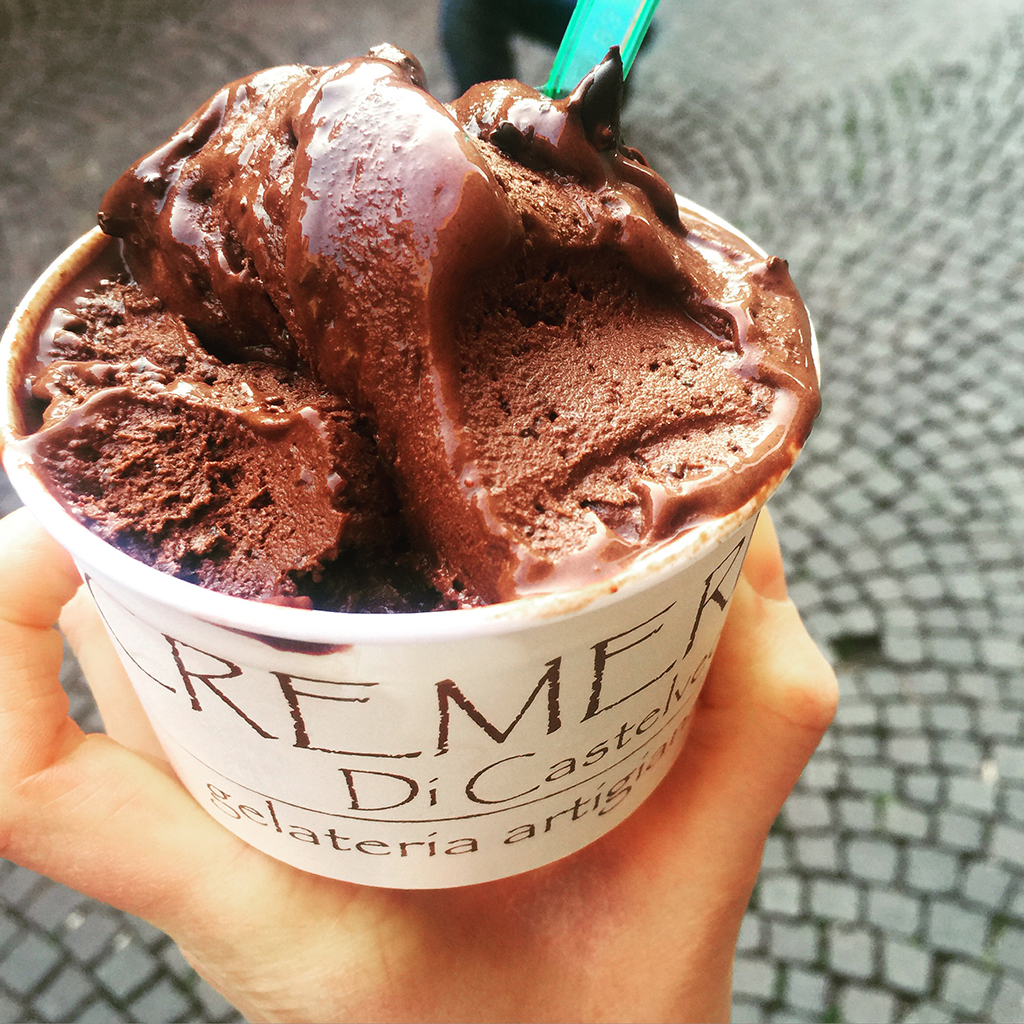 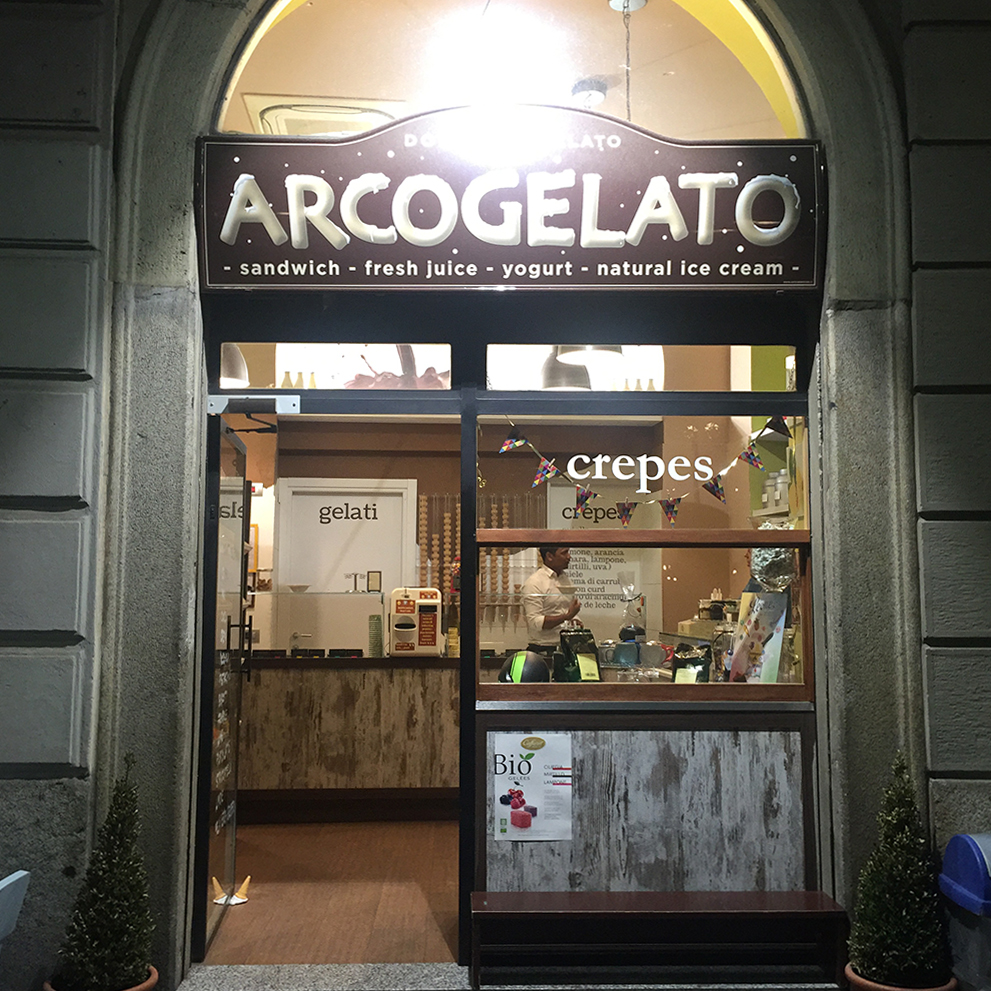 This little gem was found complete by chance – that is, by wandering in after our evening meal, looking for something sweet to seal the day. It was surprising how many ice cream parlours we walked into in Milan that had clear ‘Vegan-friendly’ labels by their ice cream counter, yet aren’t listed on Happy Cow. I’m not sure whether this is because they haven’t been discovered yet or because they don’t openly advertise it; either way I plan on reviewing this place on Happy Cow very soon!

I grabbed a duo of chocolate (of course) and sour apple. The servers in there were friendly and welcoming and as I said, everything was labelled, so I knew very easily what I could and couldn’t have. Italy is so there with this vegan ice cream thing…

See more of this wonderful city in our Milan vlog. 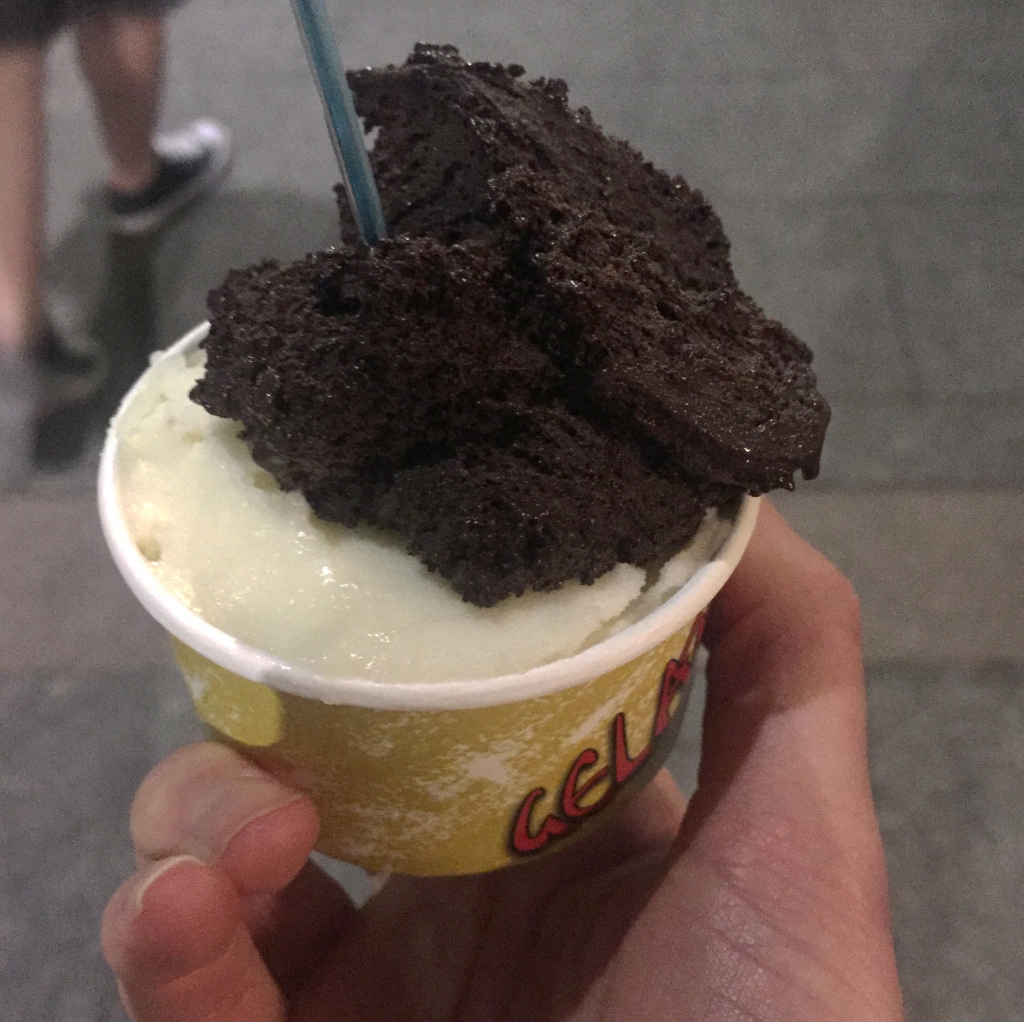 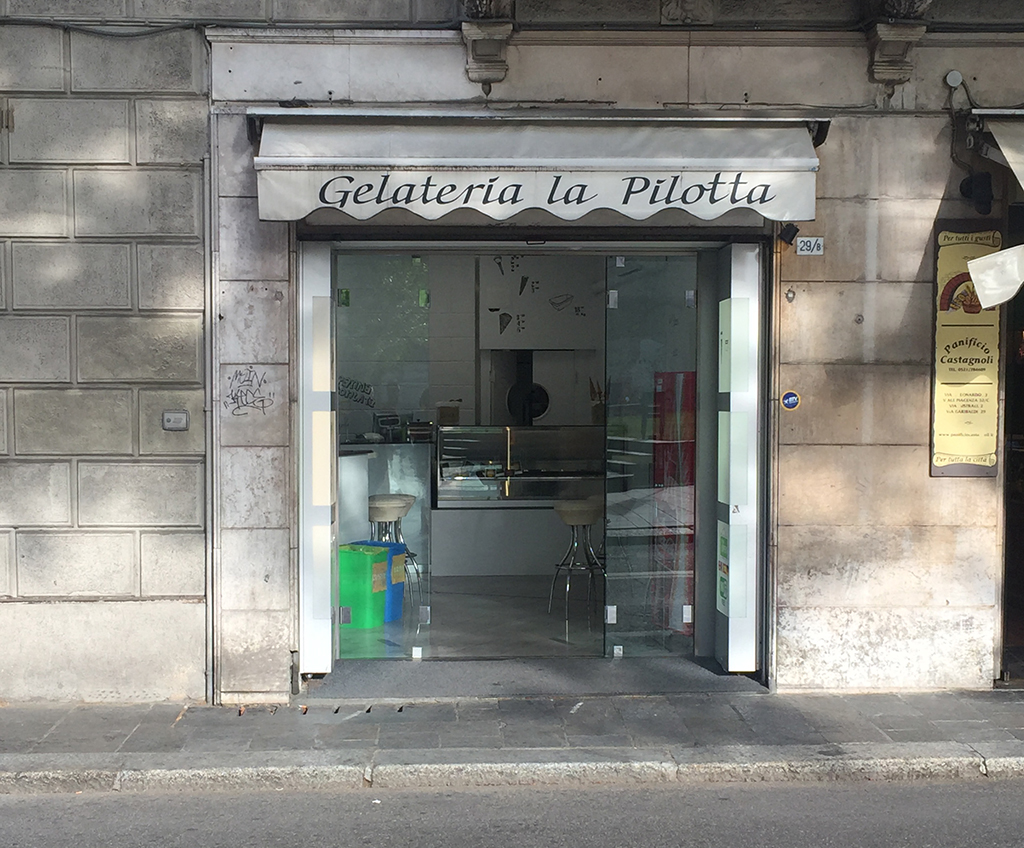 This was, hands down, the BEST vegan ice cream parlour we visited, and it was a good job too, because honestly, Parma is a REALLY quiet place. This ice cream shop for me was one of the most exciting things about it.

Not only was the ice cream delicious, it also has the biggest range of vegan flavours, some of them really creative and interesting. The guy who served me was a bit of a dude and was able to list off all the flavours that were vegan, which included everything from all the standard fruit flavours to avocado, acai, hazelnut, almond, chocolate, pistachio, mint, coconut and many more I don’t remember.

One of the flavours was pane il canello, which the server could not translate (and I couldn’t either), but he insisted it was good. Once Chris and I were outside delving in, it took a few spoonfuls of the magical mystery flavour to determine what it was (Chris actually guessed it) – CINNAMON AND RAISIN. I love cinnamon. I love raisins. The genius that had the idea to mold both of these into an ice cream and make it VEGAN is still to this day a saint in my eyes. We went back the next morning for more before hitting the road.

Watch us visiting Gelateria La Pilotta in our Parma vlog. 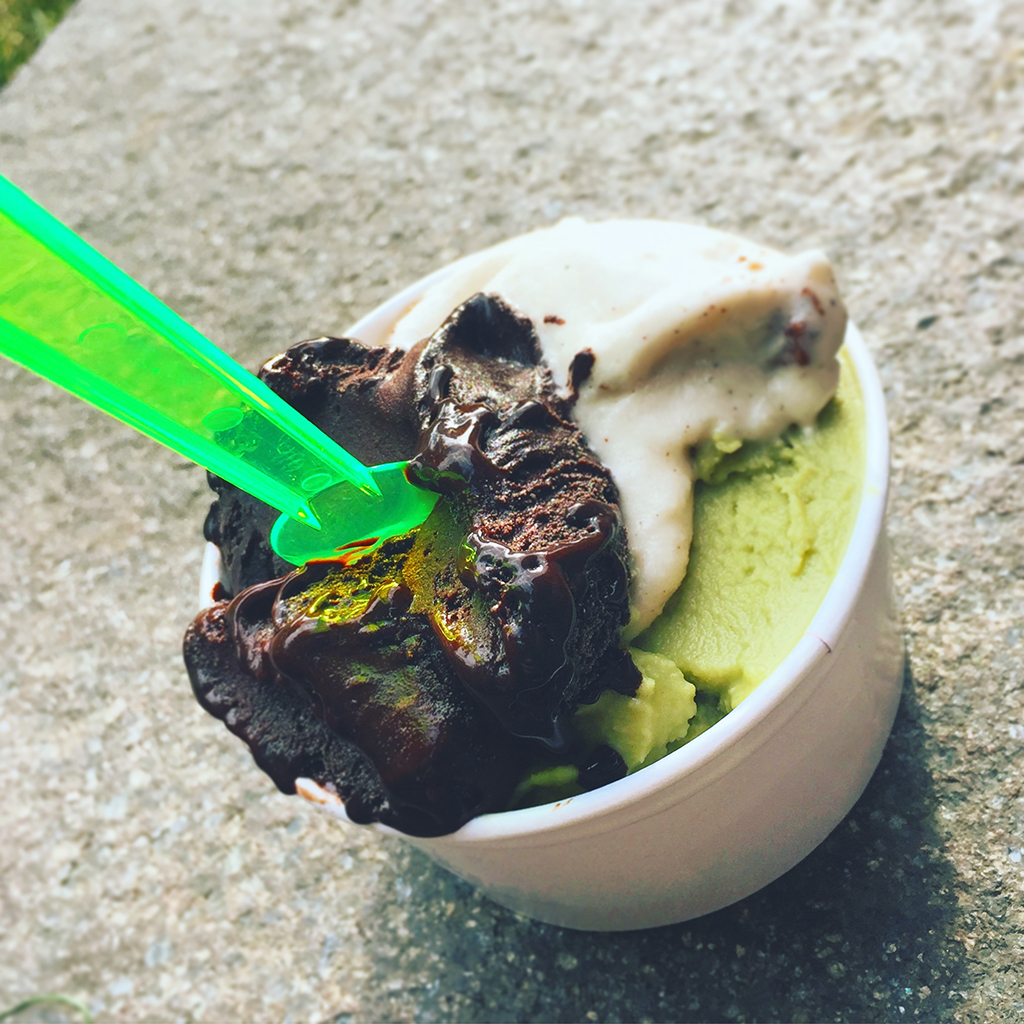 A well-known ice cream chain in Italy, you’ll find a Grom in pretty much any city, but I encountered it in the small seaside town of Viareggio, along the promenade. Although the chain is known for accommodating vegans, the range of flavours on offer varies from branch to branch, assumedly based on level of demand.

Although their full list of flavours was laid out on a wall chart, this Grom had only a handful of fruit flavours to hand, so I settled happily for a scoop each of lemon and strawberry. As an additional note, Grom caters for various dietary requirements, so there are some flavours (like dark chocolate) which contain eggs, but no dairy, for example.

See what we got up to in this beautiful beach town in our Viagreggio vlog. 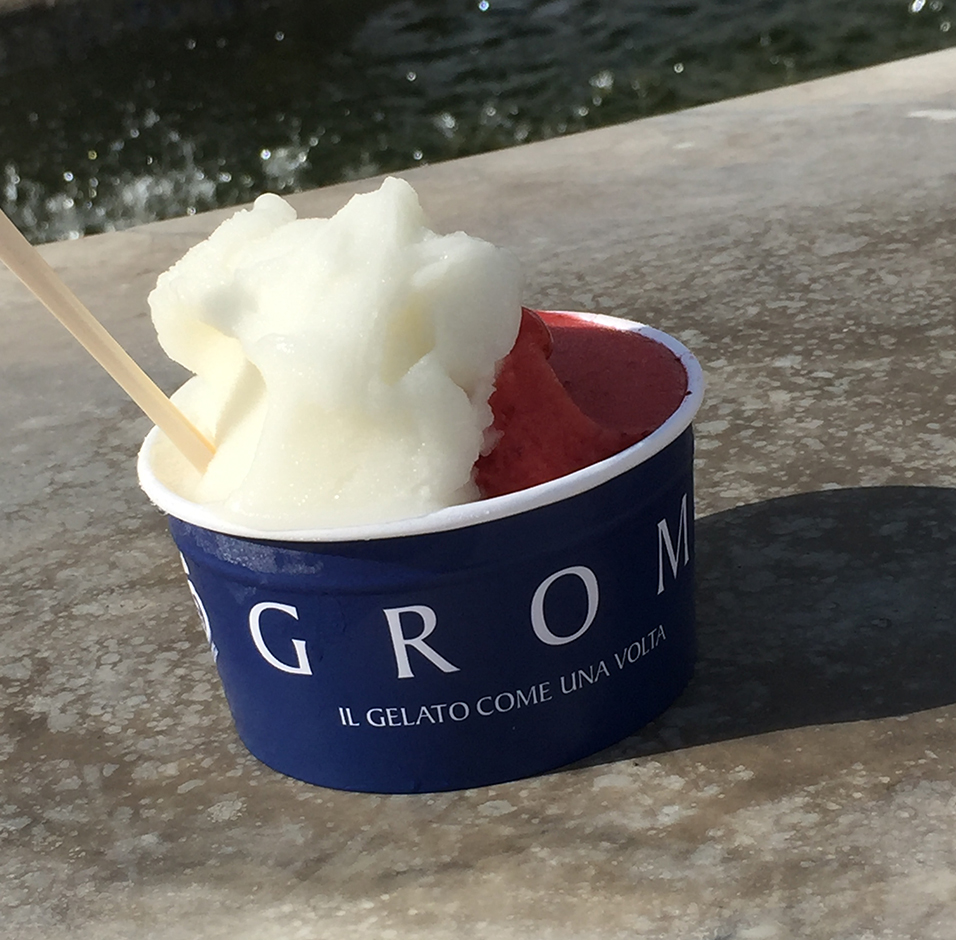 It helps to know a few Italian phrases so you can explain your foodie requirements in simple terms, without using words like ‘vegan’ which some older, non-English speaking generations may not understand.

Here are some common words and phrases that are good to use or be aware of:

There were a couple of ice cream parlours in Milan we visited that weren’t listed online but did have vegan flavours, so it is so important that you explore every ice cream place and aren’t afraid to ask.

Italy is surprisingly vegan friendly and all vegan ice creams are clearly marked, so its very hard to slip up! Retain an open mind and be excited, because the servers of Italy are always happy to help.

Got any other recommendations? Tell me about them in the comments!