I absolutely love good homemade tonic – the kind that doesn’t take long to make, uses incredibly simple ingredients and yet packs a whole load of nutritional and body benefits. It isn’t often we’d prefer a glass of hot water and ginger over a creamy latte, but I can honestly vouch for the worthiness of incorporating a good tonic into your weekly or even daily routine.

A homemade tonic will usually involve dissolving a few ‘super’ ingredients in hot water and then either sipping slowly or chugging right back. As well as being fantastic home remedies when you’re feeling rundown, they’re also great for boosting immunity in general, increasing energy levels and keeping the ol’ digestive system moving along. Whether you drink them as a prevention method or as a cheap and easy cure when you’re sick, it doesn’t matter because they have so many benefits either way! 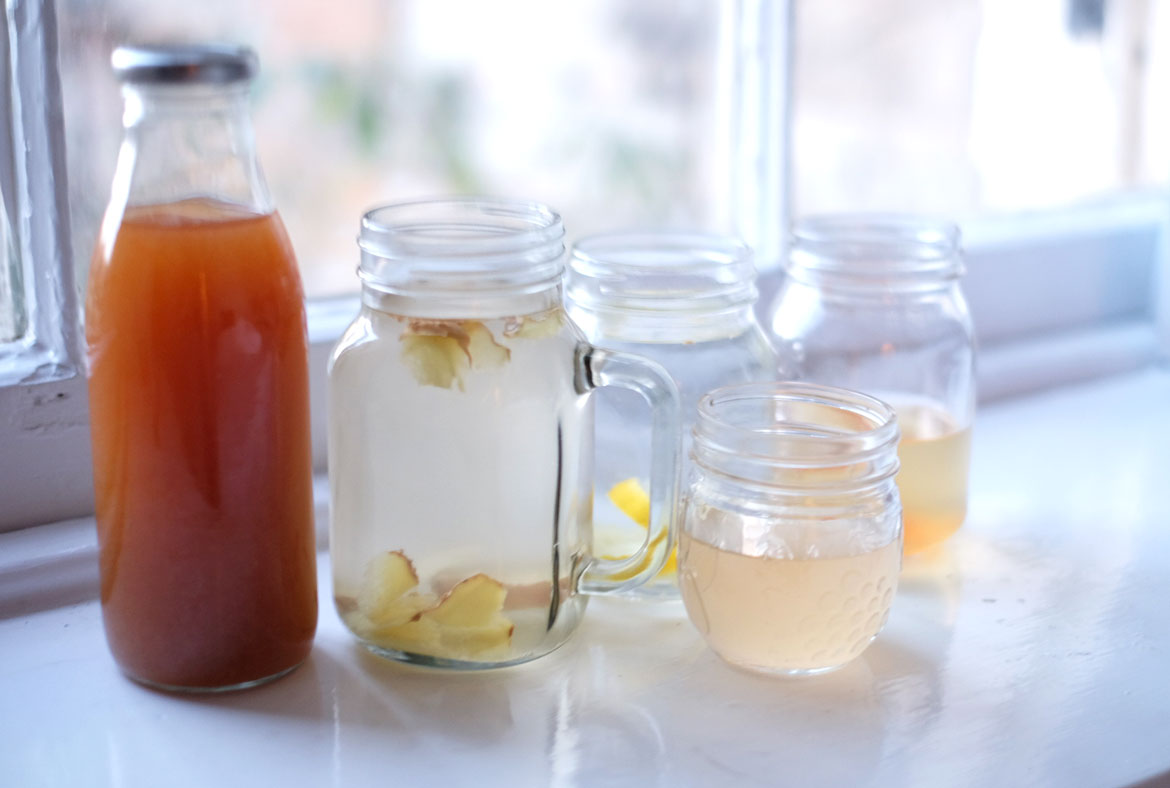 Here are a few of my own favourite homemade tonics (or elixirs, you might call them, because they’re so magical). 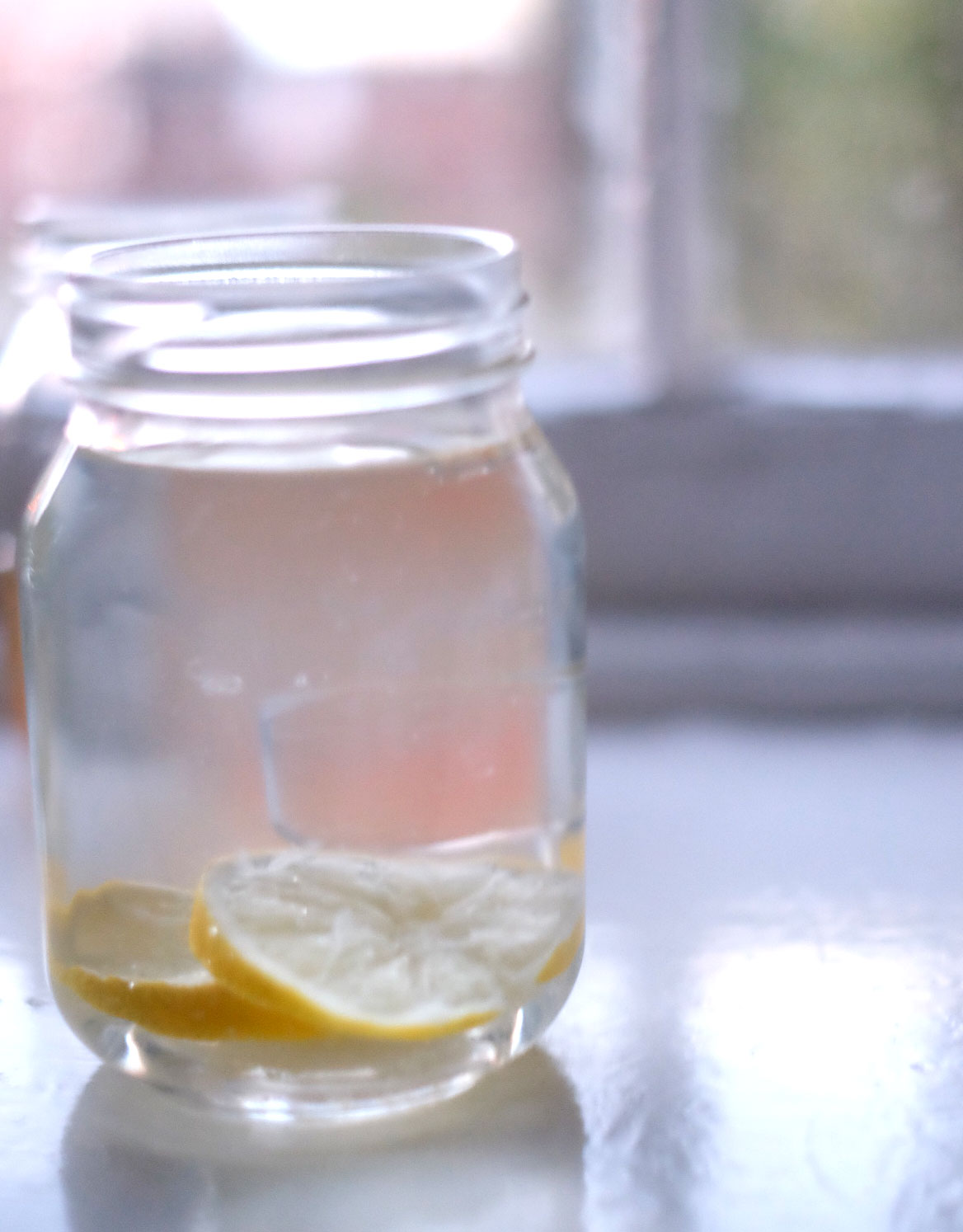 I thought I’d start with the simplest of tonics – the lemon water! Lemon water is probably already a staple in lots of people’s lives, with lemons being so high in vitamin C and having a great alkalizing effect on the body. By simply dropping a few slices of fresh lemon int0 a glass of warm water, you’ll be able to benefit from the lemon’s amazing detoxifyng properties as it seeps into the water.

Lemon water can be enjoyed all through the day, but if you want you can squeeze it neat into half a glass of hot water and drink in the mornings, to gently wake up your system. 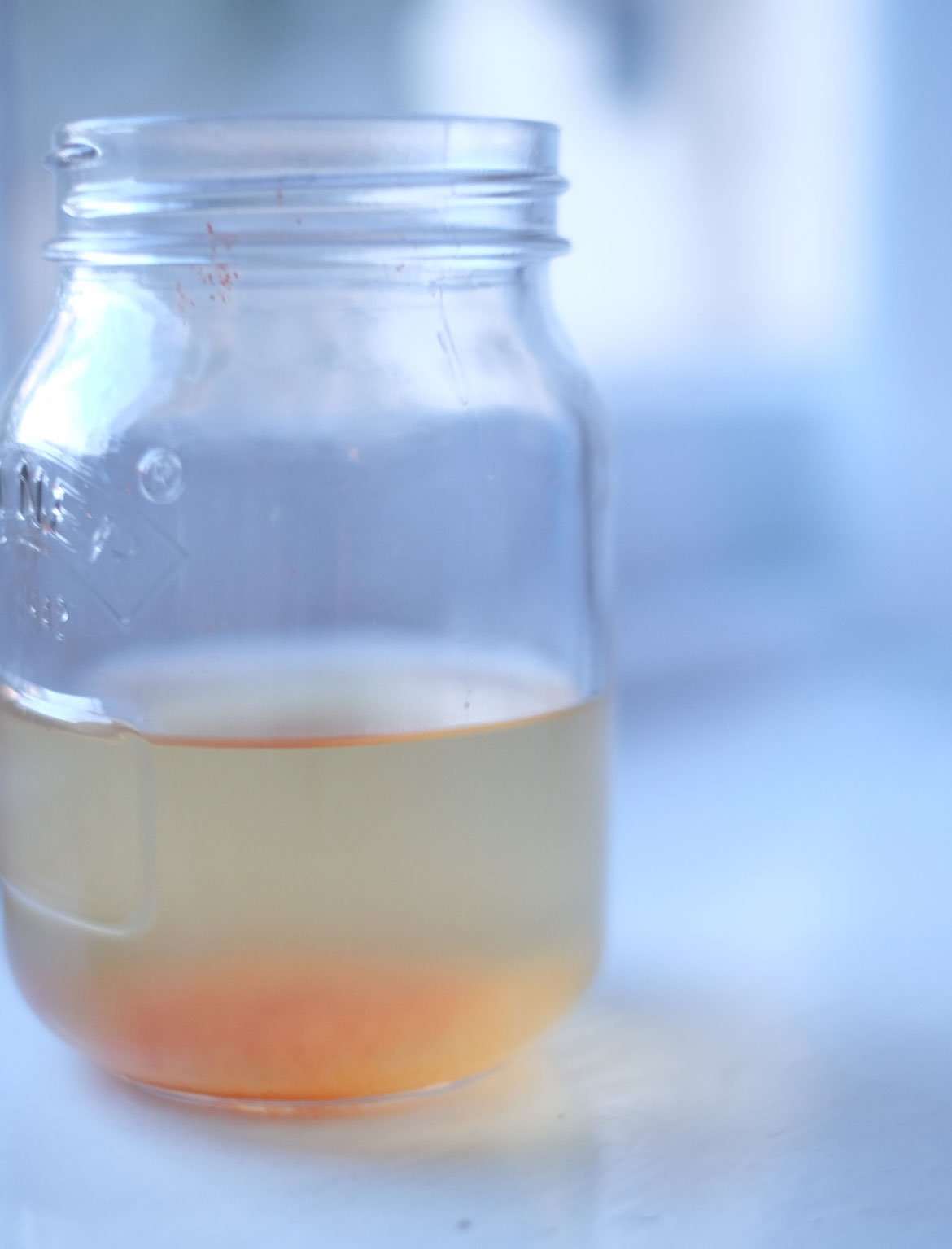 This one should be saved for the morning, as it’s intended to gently flush the body of toxins and kickstart your metabolism. (And I should also say it’s got quite a kick of its own, too!)

Squeeze half of a lemon into a glass and add a little hot water, 1 tsp maple syrup and just a tiny dash of cayenne pepper (you can vary the amount of cayenne depending on your tastebuds; start with a little first). This shot is great for waking up your body and banishing all signs of sore throats and flu. 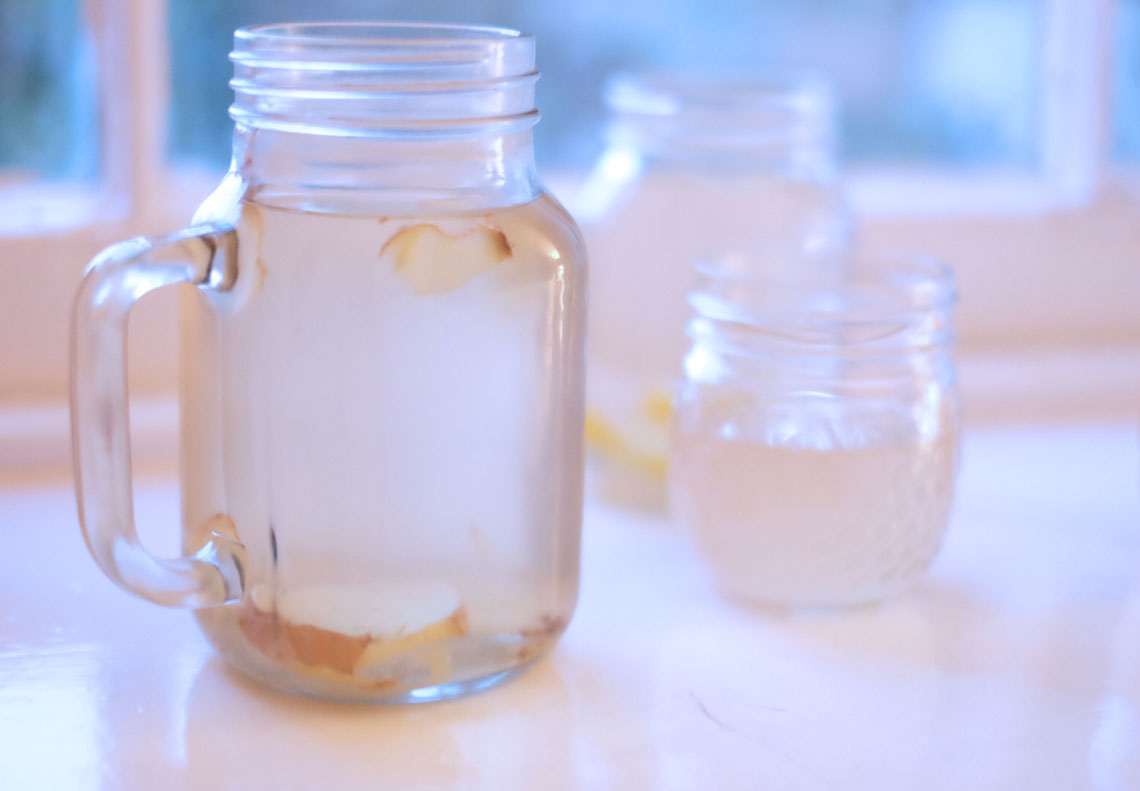 Ginger tea is so easy t0 make and is simply amazing for boosting the immune system and soothing the stomach. It can be drank first thing in a morning or after dinner to aid digestion, and is especially awesome when you’ve got a cold or sore throat.

Slice up some fresh ginger (around a thumb-sized piece), place it in a mug and add some hot water. Leave to seep for 5-10 minutes before drinking – you can either have it as it is or strain the chunks of ginger out. Sweeten with a splash of maple syrup (or raw honey, if you’re not vegan). 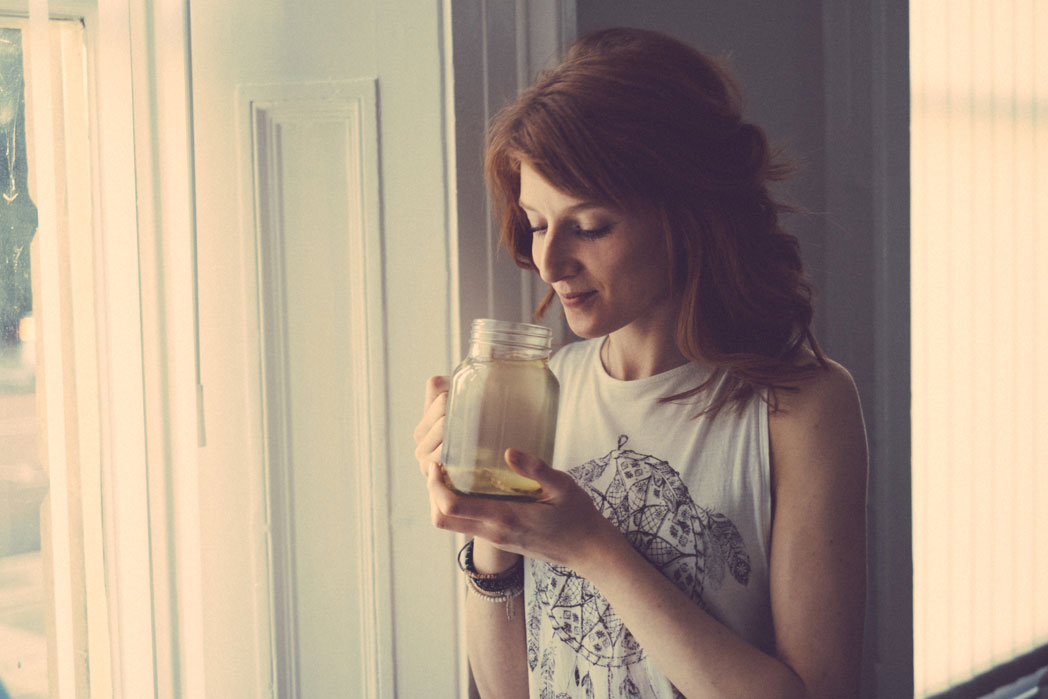 It might sound totally weird to drink what is essentially supposed to be a food, but miso broth has some amazing benefits and tastes so yummy, there’s no reason it should be kept just for cooking. Miso paste is generally made from soybeans, sea salt and koji – a mold starter. Its then mixed with a grain like rice or barley and left to ferment for anywhere between 3 months to 3 years.

Although this might sound sort of weird, it’s this fermentation process that gives miso it’s amazing healing properties. It’s great for digestion and contains a sweet dose of probiotics – essential for maintaining gut health. It is a complete protein, healthy supply of B vitamins and boosts the immune system.

Dissolve half a teaspoon to a teaspoon of miso paste in hot water and stir until no clumps remain. (How much paste you use depends entirely on your tastebuds and how strong/salty you like it, so if you’re new to miso I’d recommend just the half.) Then drink up! It tastes just like Japanese cuppa soup, I promise 😉

I will say here that unpasteurised, live miso paste is always where it’s at. I use Clearspring organic brown rice miso paste, and they also do a barley version too. 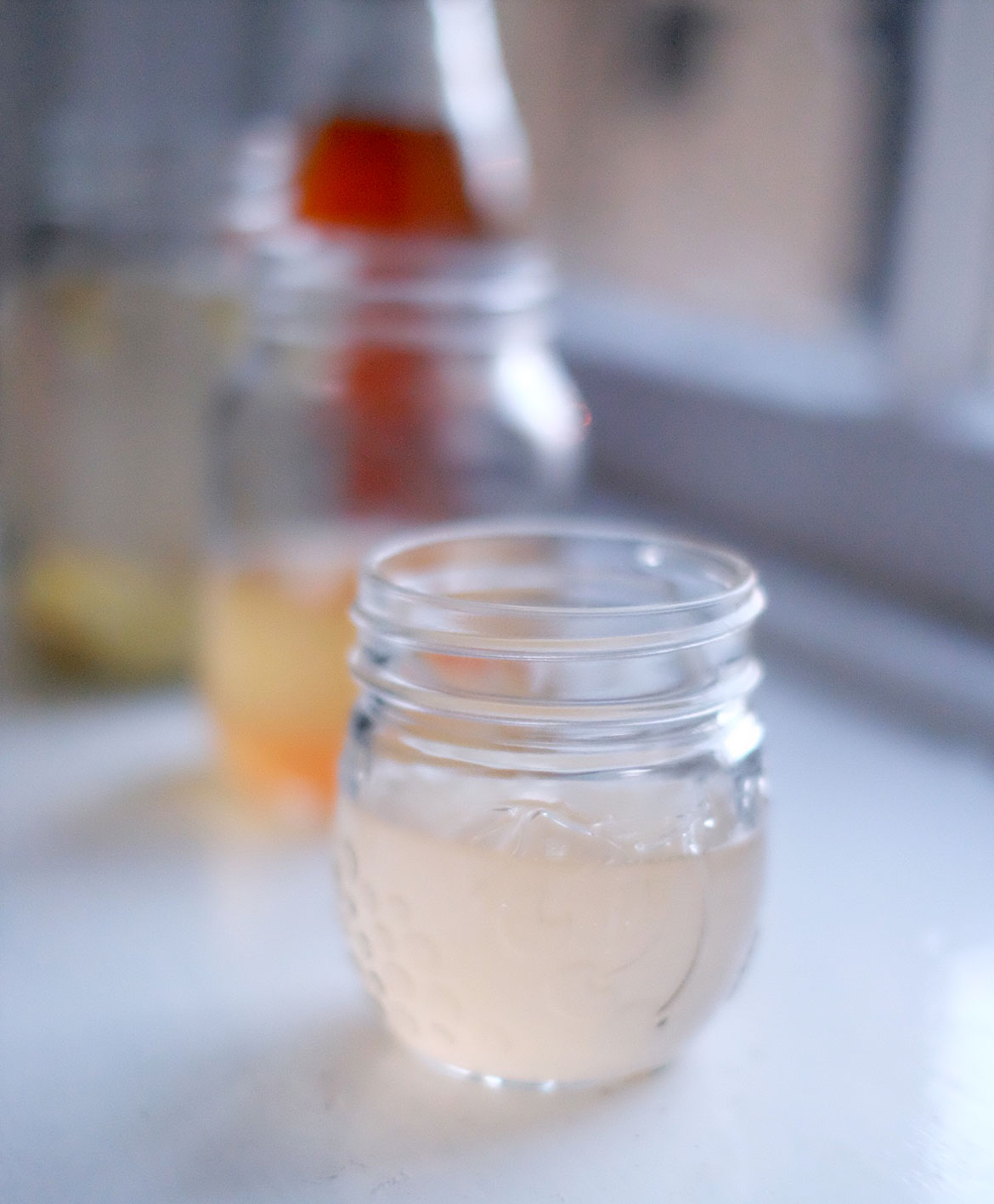 Apple cider vinegar (ACV) has already been doing the rounds amongst the foodie community the last couple of years…but for good reason. Made from the fermented sugars of pressed apples, it’s the most nutritionally powerful of all vinegars and can be used in a whole variety of ways, including salad dressings, sauces and marinades.

Taking apple cider vinegar on its own, however, was a popular ancient folk remedy and has continued to hold up in some scientific studies today. Taking just 1-2 tablespoons of the stuff each day is said to reduce inflammation in the body, gently cleanse the system and boost energy. Its also apparently one of the most effective ways to freshen breath!

When taking ACV, be sure to dilute it – I often add a good couple of inches of water in a glass with one tablespoon of ACV. It’s good to have it first thing in the morning, though ACV can be enjoyed at any time of day. 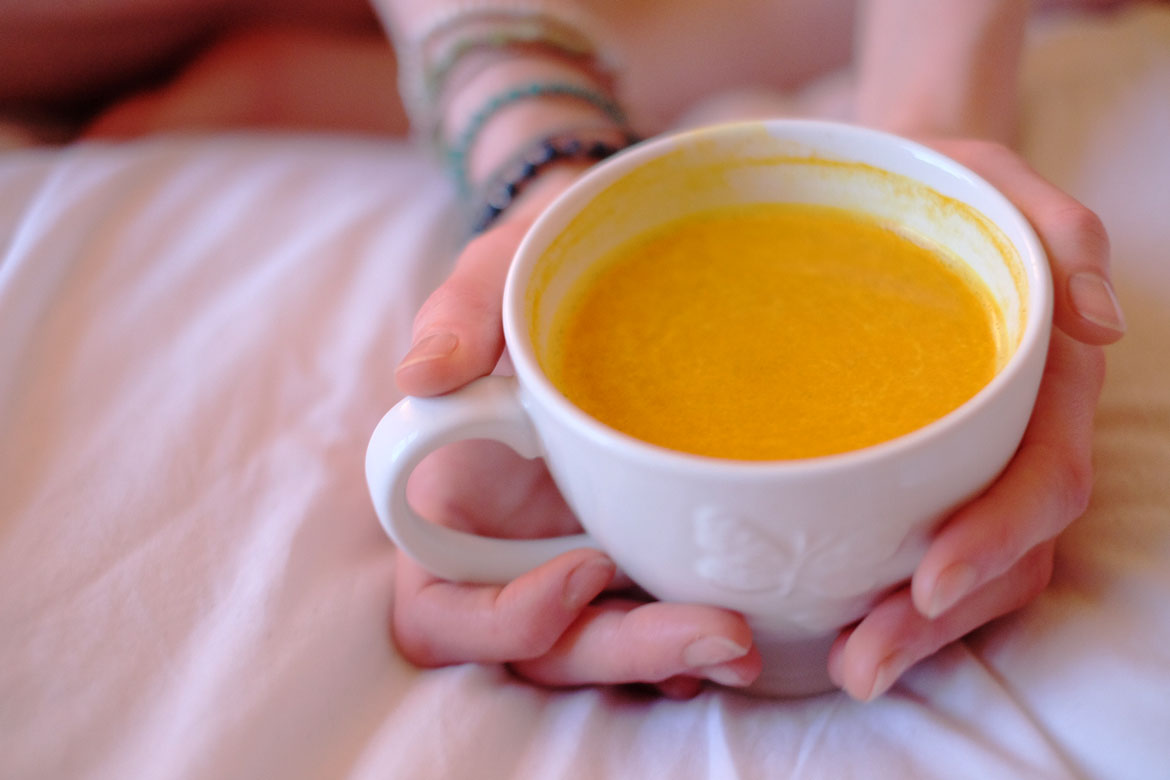 Turmeric tea (or “golden milk”, as it’s sometimes called) is quite possibly one of my favourite beverages! It basically involves dissolving a teaspoon of turmeric into a mug of milk and heating it gently till its all frothy and vibrant. A little cinnamon and natural sweetener makes it even more delicious.

Turmeric is an extraordinary anti-inflammatory ingredient, with proven ability to heal wounds, reduce your risk of cancer and protect against bacteria and infection. Although its mostly used in cooking (think curries, mustards and stews), drinking it in a creamy delicious drink can instantly up your intake when you need a little extra TLC. Drink it when your joints are feeling stiff; when recovering from an illness; when feeling tired/rundown or any time!

Here is my own personal recipe for turmeric milk. 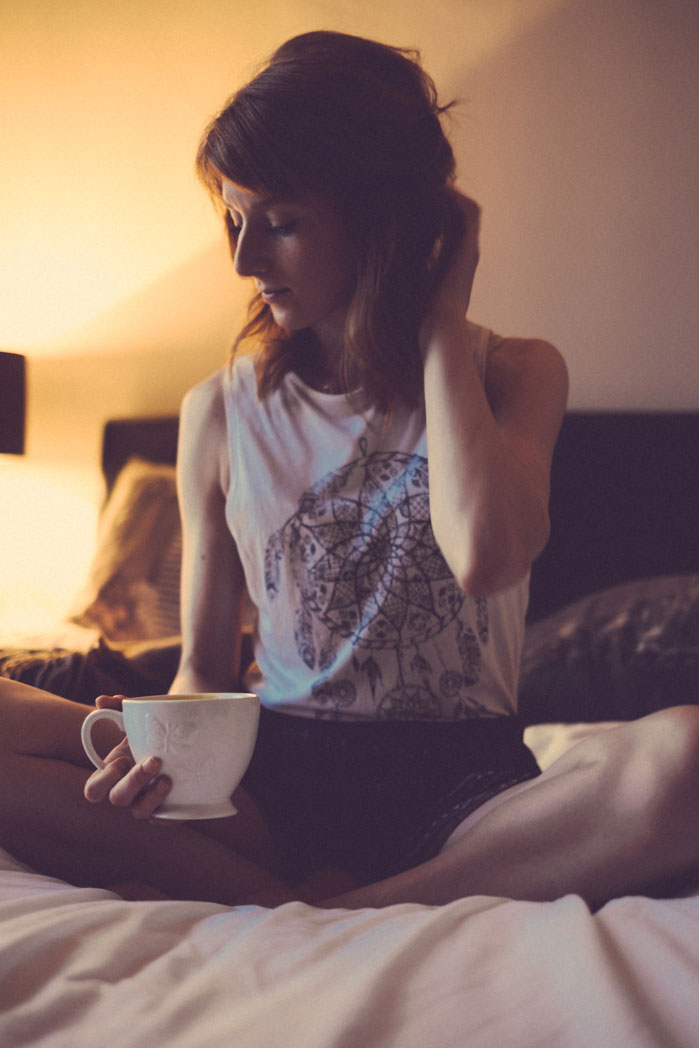 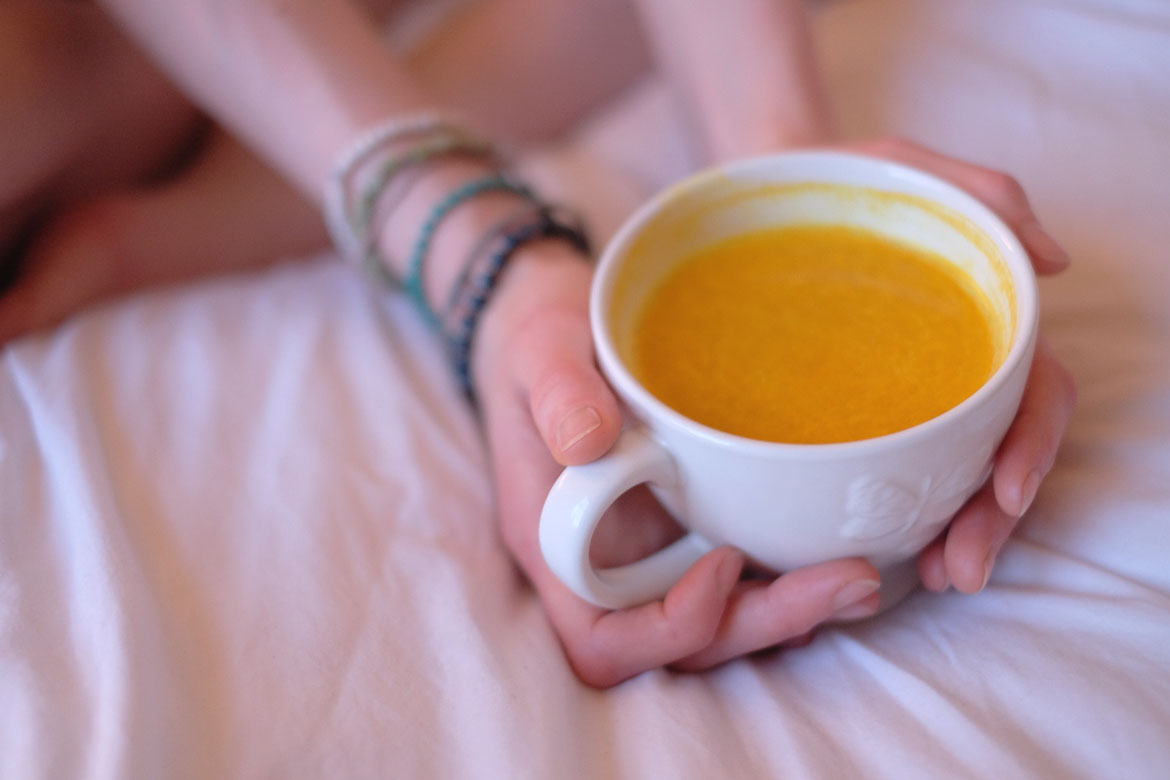 Of course, you can mix and match any of these ingredients to make a super-boosting tonic to your liking. Adding a bit of turmeric to your ginger tea, for example, or a dash of cayenne or ginger to your golden milk, will of course have wonderful benefits.

I hope you guys try some of these and let me know what you think! 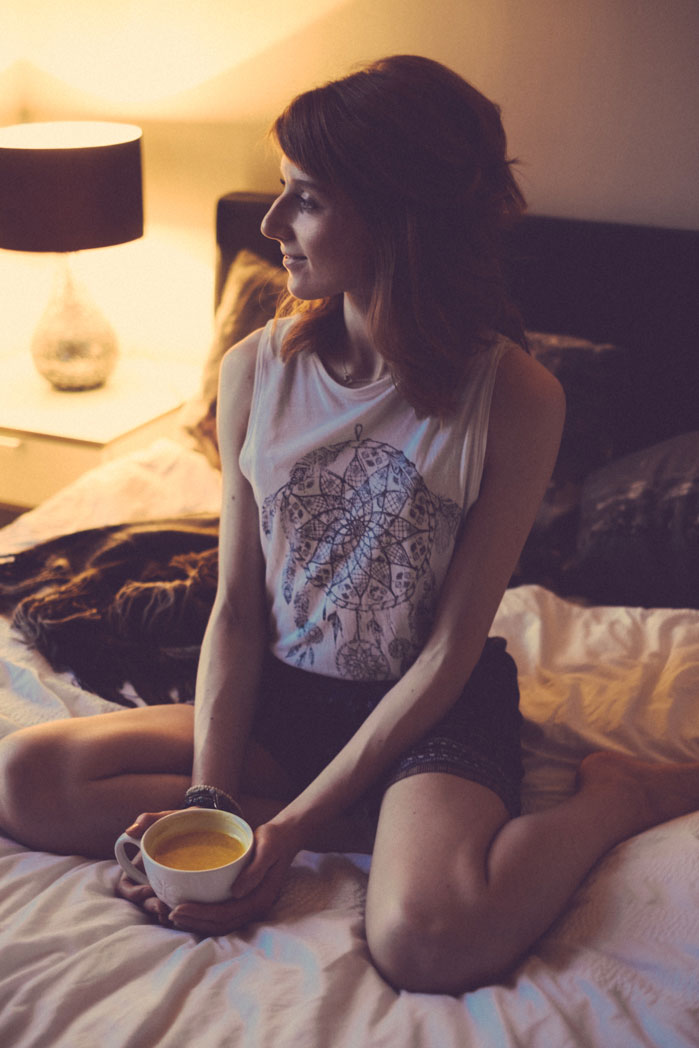